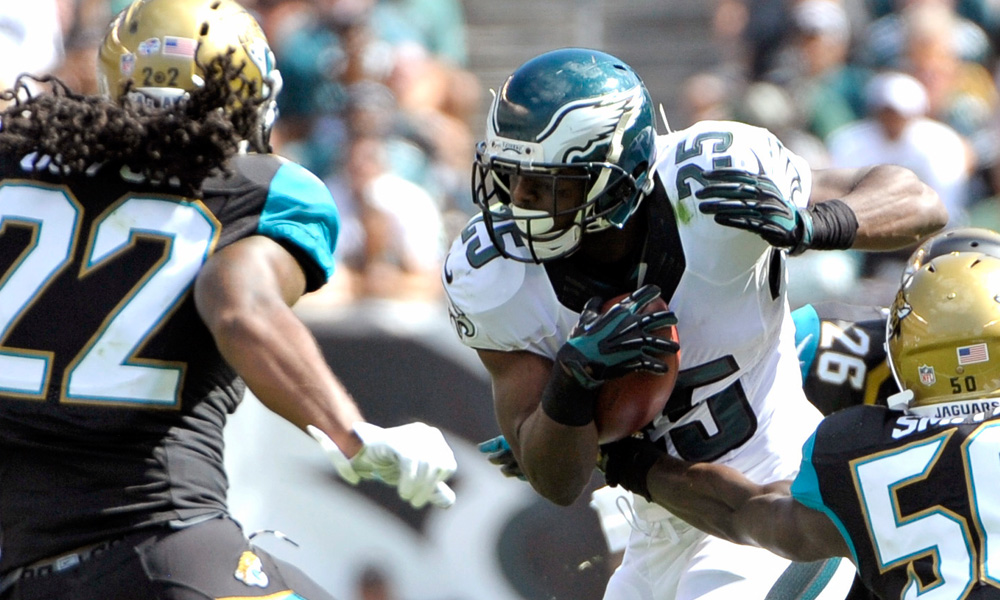 The NFC East has gone from a division which produced eight separate Super Bowl champions in the past 32 years and one as recently as 2011 has plummeted to being quite possibly the worst in all of the National Football League.

Although the Philadelphia Eagles took many by surprise last season when they won the division in Chip Kelly’s first year at the helm, Philly seems to have the most staying power.  With that said, they looked like anything but Super Bowl contenders despite winning their opener in blowout fashion.

The Eagles’ offensive line is dealing with injury and suspension, yet Nick Foles seemed to have better protection than Eli Manning or Robert Griffin III did in week one. Last year’s first-round pick Lane Johnson is suspended for the first four games of the season, and left guard Evan Mathis is headed to injured reserve, but is designated to return.

The issues on the offensive line had Foles under pressure early from a revamped Jacksonville Jaguars line that sacked the Eagles signal caller five times, forced three fumbles, recovering two. The three turnovers were a departure for Foles, who had four fumbles and a remarkable two interceptions in 2013. Nobody expected Foles to be able to duplicate the ball security he displayed last season, but the Eagles can’t be successful this season if they can’t protect the passer or the ball.

The Eagles’ offense got off to a slow start despite scoring 34 in the second half in Jacksonville, but the defense left a lot to be desired as well. The Eagles only gave up 64 yards on the ground, but Chad Henne threw for 266 yards and two touchdowns on an offense featuring three rookie wide receivers.  Chad Henne, a starter with all the tools of a backup, shouldn’t be throwing for nearly 300 yards with that receiving corps against anyone.

The good news for the Eagles is they play in the NFC East where their shaky offensive line isn’t nearly the worst, and their quarterback’s sloppy play was just par for the course.

Robert Griffin, III and his Washington Redskins scored just six points in their Week 1 loss to the Texans. The Houston defense looked very good and was swarming to the football, but if the Redskins want to compete in the NFC, they’re going to have to get Griffin comfortable and not skittish.

The Dallas Cowboys’ much maligned defense actually performed better than many expected, but Tony Romo threw three interceptions on three consecutive drives. While Romo has statistically always been one of the best quarterbacks in the game, he always has these moments, and there’s nothing about the Cowboys’ roster that shows much promise for a more positive result for 2014. It does feel right for football that someone has taken over the mantle of incompetent ownership for Al Davis.

Then there’s the New York Giants and Manning. The offensive line is once again among the worst in football, and Eli and the receivers can’t seem to get on the same page. The new offense run by former Green Bay Packers quarterbacks coach Bob McAdoo had Giants fans optimistic that less complicated routes for the young receiving corps and quick releases from Manning would get the offense moving. It hasn’t yet and with everyone having to learn a new offense it’s not likely to change anytime soon.

Every team in the division has flaws on defense. Consider this: a division that has boasted the likes of Reggie White, Lawrence Taylor, Michael Strahan and DeMarcus Ware may not have a single great pass rusher today. For years, the NFC East was considered the best division in football by many. Today, it is without question the worst division in the NFC, and it may be the worst in the entire league. AFC South, they’ll be waiting for you in the school yard after school.

This division is bad enough that just about anyone can win it, but the Eagles are set up to be the class of this meager group. When the Philadelphia offensive line is healthy and Lane Johnson returns from suspension, it is as good as any in the division. It may take just eight wins to “earn” an NFC East crown and Philly is the best bet to reach that number.