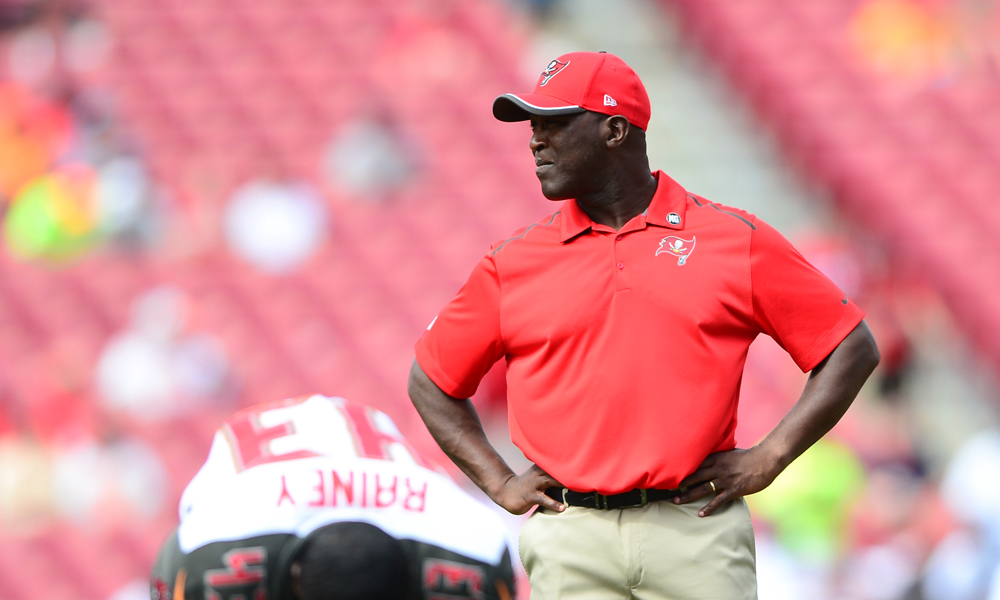 Rebuilding was a four-letter word for Lovie Smith, Jason Licht or anyone with the Tampa Bay Buccaneers this preseason, but there’s no question after two disappointing losses that that’s exactly what’s happening in Tampa.

Mired by injury and the under-performance of key free agent additions, the Bucs have dropped their first two games to back-up and third-string quarterbacks. The defense that was expected to dominate has had trouble getting off the field on third downs and has generated little pass rush from the defensive end position, and that was before the injuries.

Adrian Clayborn and Michael Johnson got no pressure on Carolina Panthers back up Derek Anderson last week, and only Johnson will have a chance to show the Buccaneers what he can do again in 2014. For the second year in a row, Clayborn will finish his season on injured reserve. The Buccaneers declined to pick up the fifth year on his rookie contract, so there’s a strong chance this could be the defensive end’s final year in Tampa. Johnson missed Sunday’s game against the St. Louis Rams with an ankle injury, but it isn’t expected to keep him sidelined for long.

By the end of Sunday’s disappointing loss to the Rams, Clinton McDonald was the only starting defensive lineman in the game for the Buccaneers as Gerald McCoy also left the game with a broken hand. You can expect McCoy to get a cast on the hand and to be back on the field Thursday night when the Buccaneers travel to Atlanta to take on the Atlanta Falcons.

The injuries don’t stop on the defensive line or even on the defensive side of the ball. Mason Foster left Sunday’s game as well and when healthy has struggled to duplicate the standard set for that middle linebacker position by Brian Urlacher or Hardy Nickerson from Lovie’s defenses of the past. The secondary has it’s share of issues as well, including losing starting corner Mike Jenkins for the season after week one to a pectoral injury.

Bobby Rainey filled in as well as you could possibly hope, but the offense was without Doug Martin, who was hampered by a knee and rookie tight end Austin Seferian-Jenkins missed the game with a bum ankle. Seferian-Jenkins had just one catch in week one, but has shown the potential to have a major impact on this struggling Buccaneers offense.

To the surprise of many, one of the biggest issues plaguing the Buccaneers offense is the play of quarterback Josh McCown. McCown seemed more comfortable against St. Louis than he did against Carolina, but he threw his third ill advised interception of the season. All three of McCown’s interceptions this season came on plays where he really should have taken a sack or thrown the ball away.

Lovie and the Bucs have really been thrown a couple of curve balls to start the 2014 season. The Buccaneer offense seemed to have a better flow in week two and it may be a direct result of the fact that new Offensive Coordinator Jeff Tedford was calling the plays, unlike a week ago when Tedford, while in the press box, left play calling to his assistant coaches after undergoing a procedure on his heart.

From injuries to a struggling offense the Buccaneers are in need of a spark in a major way. In the spark department, Lovie may be his own worst enemy. While the Bucs need a spark, Lovie has continued to play a very conservative game. When an offense struggles to score, the more possessions they have, the more chance they have that something pops open and they find some cheap points, or better yet, find that groove that carries them forward.

Midway into the third quarter against Carolina, Lovie declined to send rookie kicker Patrick Murray out to attempt a 53 yard field goal despite the fact the Bucs had yet to score. The Bucs got to within three late in the fourth quarter of that game.

With the game tied, the Buccaneers stopped the Rams with 1:22 before the half setting up the Rams with a field goal which gave the Rams a 10-7 lead. Instead of calling a time out, the Bucs allowed the play clock to run out before St. Louis called a time out of their own and kicked a field goal with 39 seconds remaining in the half. The Bucs got the ball back with 33 seconds and made no attempt to move the football into scoring position. Had they used a time out at the 1:22 mark, the Bucs could have had the football with over a minute left in the half, and two time outs.

The Bucs went up 17-16 on a late Patrick Murray field goal, but a driving Buccaneers team chose to run the ball on third and seven instead of going to the air to pick up a first down in pursuit of an eventual touchdown. An offense that’s struggling needs as many opportunities to score as possible, and can’t be so conservative in the moments that make the difference between victory and defeat.

After the mess that was the Greg Schiano era,Smith was the right man to try to steer this Buccaneer ship back to respectability, but there may be some choppy waters along the way. The water doesn’t get any calmer for Tampa Bay any time soon, either. After falling at home to Anderson and Austin Davis, they have a short week to get ready for the Falcons and Matt Ryan Thursday night.