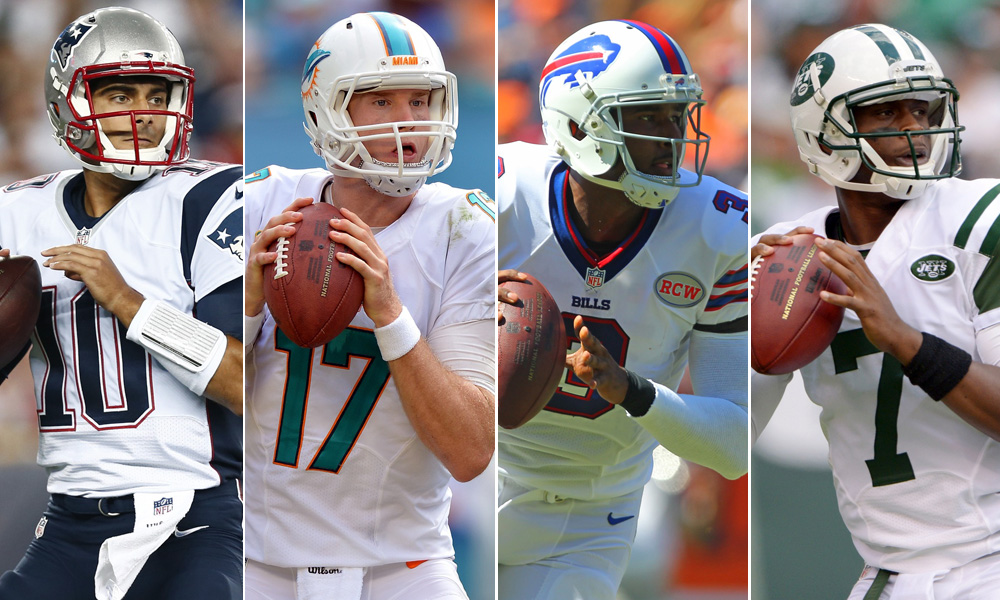 Before the NFL season begins, everyone likes to pick their playoff teams, division winners and ultimately their Super Bowl matchup.  In a league that averages roughly five new playoff teams each year, one of the division picks is always easy and automatic- the New England Patriots in the AFC East.

In a division dominated for the better side of a decade, Patriots quarterback Tom Brady has been the golden boy and iconic face of the AFC East and NFL while winning Super Bowls and setting league records. As the former sixth-round pick from Michigan enters his 15th NFL season, even Brady’s own team knows Boston’s living legend can’t play forever.  That moment of clarity came back in May when the Patriots drafted Jimmy Garoppolo as their latest quarterback of the future in the second round of the draft.

With 2014 containing interesting plots at the quarterback position across the AFC East with young captains at the helm of their respective offenses and an heir apparent to the winningest quarterback of his respected franchise, who will become the new face of AFC East when Brady retires? Or is that changing of the guard already happening?  With the evolution of the NFL into a predominantly passing league, the importance put on the quarterback position will more than likely put the focus on the other quarterback situations in the division. As a team in today’s NFL is only as good as their guy pulling the trigger.

In the states of New York and New Jersey, there are a pair of second-year quarterbacks embarked on a season of imminent pressure. After posting sub par rookie campaigns, the New York Jets’ Geno Smith and the Buffalo Bills’ E.J. Manuel seem to be headed in different directions. Smith struggled as a rookie, but was able to finish his season on the up swing, while Manuel struggled with injuries and seemed to regress at the end of the season.

Unfortunately for both of them, the early returns didn’t breed much confidence with their front offices as the Jets went out and got Michael Vick in free agency to light a fire under Smith and the Bills, who took a more wait and see approach, finally talked Kyle Orton out of retirement before the season began.

This season is make or break for these young starters as the leash for young quarterbacks gets shorter and shorter, especially with the recent success of young quarterbacks such as Andrew Luck and Russell Wilson, as well as the rookie pay scale. Smith and Manuel need to show considerable development to remain the starters on their teams, let alone become the new face of a division dominated by one of the best quarterbacks in NFL history.

In Miami, the Dolphins have a quarterback whose development has been steady with flashes of spectacular in Ryan Tannehill. Even the division’s master mind Bill Belichick has been impressed with the youngster for quite sometime, offering this tidbit before a 2012 game during his rookie year .

“It looks like there’s a good level of comfort there,” Belichick said of Tannehill. “They’re certainly not afraid to put the ball in his hands in critical situations and he’s done a good job of delivering for them. [He’s] done a good job with that team; he’s a good player.’’

And the tune hasn’t changed, as the Patriots head coach recently praised Tannehill again in a conference call with local Miami media before the Dolphins handed the Patriots a loss in Week 1 of the 2014 season.

“I think he throws the ball well, he’s obviously athletic and has good skills in terms of game management,” Belichick said. “Handling critical situations, two-minute drives, things like that, he’s good, it’s all there.”

With Tannehill leading the Dolphins to consecutive victories over the Patriots, some might say a changing of the guard is already taking place in the wake of Brady steadily slipping back to the mean and Tannehill’s steady improvements in his game, benefiting from a quarterback whisperer in new Offensive Coordinator Bill Lazor, who is demanding more from the former first-round pick.

All told, there is plenty of youth and talent within the AFC East and the next star propped up to prominence will be the one who leads their team past the Patriots in the division or into the playoffs.  With Garoppolo being an unknown, Manual and Smith both struggling more than succeeding, it appears that Tannehill has shown the most of the “next” group of signal callers.  It will be interesting to see what kind of talent their respective teams put around these young quarterbacks and who will ascend as the AFC East’s “heir apparent.”

Time For The NFL’s Overreaction Monday

Bills-Dolphins: What we learned