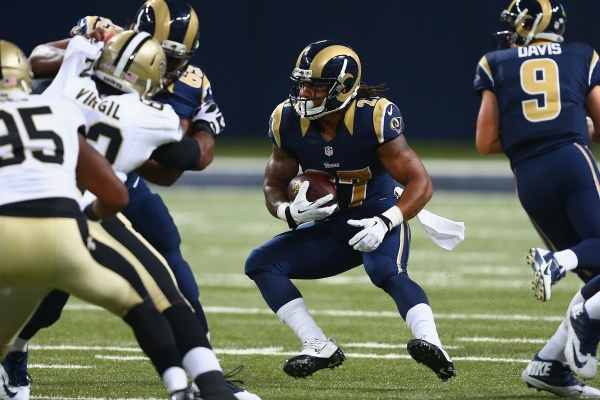 No one can ever prepare for the unpredictability of Fantasy Football. We’re seven weeks into the season and Colts backup running back Ahmad Bradshaw has more touchdown catches (6) than Calvin Johnson, A.J. Green, and Andre Johnson combined. Meanwhile, Cowboys star running back DeMarco Murray has 300 more rushing yards (913) than the next closest running back (Arian Foster with 615). As fantasy football players, we have to adapt, no matter what this crazy league throws at us.

Tre Mason (RB – STL – 2.3% owned): After a productive rookie year, Zac Stacy has completely fallen off the map, leaving way for Tre Mason to carry his duties as the lead running back. Since Week 2, Stacy’s carries have dropped from a week-to-week basis, ultimately leaving him with zero carries this past week. Mason took advantage of the opportunity and ran for 85 yards and a touchdown on eighteen carries against a very good run defense in the San Francisco 49ers. With the starting job locked up, Tre Mason should be owned in all formats.

Dwayne Allen (TE – IND – 28.4% owned): It’s a wonder why Dwayne Allen isn’t owned in more leagues. After losing last season due to injury, Allen has been Andrew Luck’s safety cushion. He has 305 yards and five touchdowns this season even after missing a game. He has caught a touchdown in five of six games and has gotten below 40 yards only once this season (a game where he had 38 yards and a touchdown). With Reggie Wayne doubtful for Week 8 and Week 9, Allen will have even more value.

Denard Robinson (RB – Jac – 0.5% owned): The Jaguars’ running game has been a mess ever since Maurice Jones-Drew dropped 1,606 yards in 2011. However, with an injury to Toby Gerhart and an ineffective Storm Johnson (2.3 AVG past two games), Denard Robinson, former quarterback for the Michigan Wolverines, is taking advantage of the opportunity. The Jags gave him 22 carries this past week and he took those for 127 yards and a touchdown. He has a huge upside.

Bryce Brown (RB – Buf – 1.3% owned): The starting running back position in Buffalo is up for grabs now that Fred Jackson (groin) is expected to miss at least four weeks and C.J. Spiller will miss the rest of the season with a broken collarbone. Bryce Brown undoubtedly has the most talent among all the Bills’ running backs, which includes Anthony Dixon and newly-signed Phillip Tanner. He is averaging 4.6 yards per carry in his two years in the NFL. Expect Brown to get most of the work; however, Dixon could take away some goal-line carries.

Donte Moncrief (WR – Ind – 0.2% owned): Moncrief, a rookie from Mississippi, has the potential to break out at any second. Last week, Moncrief lined up for the third most snaps (23) among Colts receivers, four more than Hakeem Nicks. With Reggie Wayne (elbow) expected to miss 1-2 games, Moncrief will continue to be the Colts’ second receiver. In Week 3’s games, Donte filled in for T.Y. Hilton in the second half after Hilton left because of an injury. He took advantage of his time in the starting role and caught four passes for 55 yards with a seven-yard reverse run. Playing on the number one offensive team in the NFL with a Pro Bowl quarterback like Andrew Luck, Moncrief’s potential is through the roof.

Can You Still Win A Super Bowl With A Game Manager?