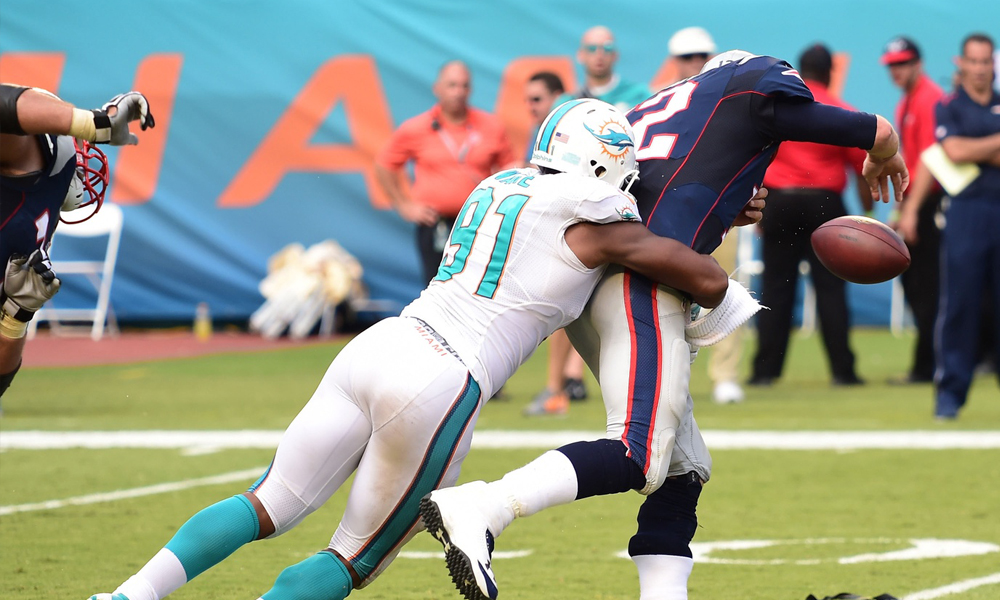 When a quarterback lines up under center, he scans the defense and looks to identify where the most impactful defenders are lined up on that play. In most cases, a quarterback only has to seriously worry about one or maybe two defensive linemen disrupting his offense on a consistent basis. However, at any given time the Dolphins could have four defensive linemen on the field that must be accounted for and worried about on every play.

Consequently, this has increased the value of the players who are tasked with protecting and pressuring the signal-caller as well.

The reason for this is simple; the easiest way to disrupt a quarterback’s timing is to get pressure on him on a regular basis. Furthermore, if a team can get pressure on a quarterback with just four down linemen (or their three down linemen and one linebacker if they are employing a 3-4 defense), then it will allow the defense to win the numbers game in the passing attack. For example, if a team only rushes their four defensive linemen that means they can put seven players into coverage to cover the opposing offenses receiving options. Moreover, an offense already has five offensive linemen and the quarterback who can’t receive the ball, which means that at the most an offense can employ five players who have the capability to catching a pass. Therefore, the defense has seven defenders covering five receivers, which greatly increases their ability to stop the opposing offenses passing attack. Teams that can get to the quarterback consistently with their front four have a huge advantage.

The Miami Dolphins are in the unique position where they have five extremely effective and productive defensive linemen who together can rush the passer and stop the run.

First off, the Dolphins have the most dominant 4-3 defensive end in the NFL with Cameron Wake. Standing in a 6-foot-3 and 262 pounds, Wake does everything you could want out of a defensive end. He is a terrifying pass-rusher coming off the left edge of the Dolphins defense, while also being very capable to hold his own in the run game. Thus far this season, Wake has 8.5 sacks, 9 quarterback hits, 25 quarterback hurries. Wake is also second among 4-3 defensive ends in pass-rush productivity (a stat that takes quarterback hits, hurries and sacks to determine how productive a pass rusher was) per Pro Football Focus.

Wake wins with his first step off the line of scrimmage, coupled with his speed and bend around the edge. Wake is at his best when he is aligned at the wide-9 technique (on the outside shoulder if there was a tight end), which puts an immense amount of pressure on the opposing offensive tackle to get out of his stance and into his pass set. at this alignment, he explodes out of his four-point stance, gets to the apex of the pocket, dips his inside shoulder, torques his body and bends his ankles, which allows him to sharpen is angle to the quarterback where he utilizes his incredible closing speed to get to the quarterback.

While Wake is the best speed-rusher in the NFL and has the rare ability to win with his quickness alone, he also displays a great ability to convert speed to power to walk a tackle back into the quarterback along with a violent rip technique to disengage and separate from an offensive lineman. Wake’s rare speed, flexibility and hands are the biggest reasons why he is the best 4-3 defensive end in the NFL.

The other bookend for the Dolphins is the highly underrated Oliver Vernon, who plays as the right defensive end and measures in at 6-foot-2 and 268 pounds for the Dolphins. He isn’t as productive as Wake, but he still makes a huge impact. He has recorded 4.5 sacks, 8 quarterback hits, 18 quarterback hurries and 15 stops through the first nine games of the season. This has led to Vernon ranked 18th in pass rush productivity per PFF.

While Wake mostly wins with his dominant initial burst, Vernon has showcased the ability to win in a variety of ways. Wakes pass-rush plan is predicated on not letting opposing blockers engage with them as he comes off the edge; however, Vernon is more apt to create contact against the run and rushing the passer. Vernon wins with his hands and wide variety of pass-rush moves. He has showcased the ability to win with a straight speed rush, but on most occasions he wins due to proper hand usage and technically sound spin, rip and swim moves.

The Dolphins have one of the best pass-rushing duos with Wake and Vernon, but they also have the luxury of having one of the deepest and most effective defensive tackle rotations as well. They have three players who rotate along two defensive tackle positions and each one is extremely impactful in their own way.

First, there is Jared Odrick who is sort of the Swiss Army knife of the defensive line as he has lined up at nearly every position from 0-technique nose tackle, to 5-technique defensive end. Odrick doesn’t have the stats that his defensive end counterparts do, but his impact should not be understated. Odrick is kind of like the point guard for the defense as his actions directly put his teammates in great positions to make plays. One example is that Odrick gets a great deal of interior pressure, which doesn’t allow the quarterback to step up in the pocket and allows the defensive ends to have an opportunity to get around the edge for the sack.

Furthermore, he has a great understanding of leverage and power. He keeps his hip coiled and explodes in opposing blockers as he keeps his hands inside of the blockers with his arms extended. This allows Odrick to get a great deal of push in both the running and passing games. Odrick also has a very quick step for someone his size (6-foot-5 304 pounds) that allows him to quickly jolt the opposing linemen before they even get out of their stance at times.

The next impactful defensive lineman is 1-technique defensive tackle Earl Mitchell. While the other effective defensive linemen on the Dolphins are known for their quickness, Mitchell doesn’t. Mitchell wins because he is a big (6-foot-3 and 310 pounds) and extremely strong to go along with his relentless motor. There have been several occasions in which Mitchell chases down much better athletes due to hustle. He does a great job of getting his hands inside of the blockers chest and driving with his lower half to create push in the interior lands. He takes on double teams incredibly well as he knows how to keep his hips low and his feet moving to anchor against two blockers. Mitchell may not get the limelight of some of his counterparts, but he is extremely valuable to what the Dolphins do on defense.

The last defensive lineman who has played exceptionally well is the veteran Randy Starks, who stands in at 6-foot-3 and 305 pounds. Starks is the hybrid defensive tackle as he plays at both the 1- and 3-technique defensive tackle position. Starks is exceedingly stout against the run as he has a great understanding of gap-responsibility and he very rarely gets moved out of his gap. Starks doesn’t have any pass-rush traits that wow you, but he knows how to push the pocket and disengage of blocks to make plays when the quarterback steps up in the pocket.

As a whole Miami has a great mix of power and speed along with a nice mix of run-stuffers and pass-rushers. Whatever play the opposing offense calls, the Dolphins have the personnel up front to deal with and stop it. The Dolphins defensive line is tied for fourth in sacks from its defensive line with 28 per Football Outsiders (subscription required), which points to their ability to get after the passer on a regular basis. Moreover, the defensive line is largely responsible for a defense that ranks 11th in DVOA (which measures a team’s efficiency by comparing success on every single play to a league average based on situation and opponent) against the run per Football Outsiders (subscription required).

The Dolphins defensive line is the total package as they are equally successful against the run and the pass.

Miami is at a crossroads in their season as they can go on a run and make the playoffs or they can falter down the stretch and once again be on the outside looking in. Nevertheless, if the Dolphins do put together a string of wins and make the playoff, their defensive line will be one of the major reasons why.