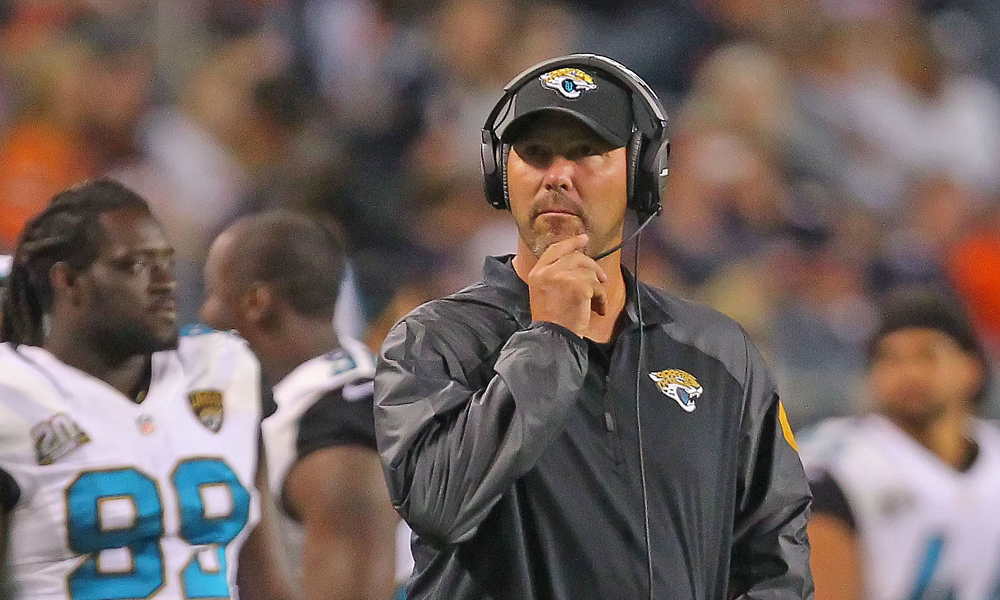 The Jaguars notched their first win of the season, scoring the game’s final 24 points in a 24-6 win over the Browns. It was a devastating loss for Cleveland, as the Browns were generating some playoff buzz after last week’s 31-10 win over the Steelers.

“We just didn’t play well,” said Browns quarterback Brian Hoyer. “We got our butts kicked and you just have to give credit where credit is due.”

There was some concern this week that the Browns were in for a letdown after two consecutive victories. Prior to the trip to Jacksonville, Cleveland coach Mike Pettine talked about this being a “trap game” for his squad. The concept of any game being overlooked by the Browns — who have not won more than five games in a season since 2007 — is absurd.

This should be a reality check for Pettine’s group. Next week, Cleveland hosts the Raiders, the last winless team in the league after Jacksonville’s runaway victory. But as the Browns now know, any team in the league can beat you if you don’t play your best ball.

Making matters worse for Browns fans, they had to watch their former quarterback, Colt McCoy, step in for the Redskins and lead a second-half rally in Washington’s 19-17 victory over Tennessee. McCoy completed 11-of-12 passes for 128 yards and a touchdown, good for a remarkable quarterback rating of 138.9.

Hoyer’s passer rating against the Jaguars, by comparison, was 46.3.

Who wants the NFC South?

The NFC South has long been the NFL’s wackiest division, as no team has ever won the division two years in a row. The Saints, Falcons and Buccaneers seem to be doing their darnedest to help the Panthers snap that streak, but so far, Carolina seems uninterested in capitalizing.

The Panthers took a whooping in Green Bay, falling behind 28-0 before eventually dropping a 38-17 decision. It was Carolina’s third loss by at least 18 points this season.

“We can’t start the way we did as a defense and allow those things to happen,” said Panthers coach Ron Rivera. “We can’t self inflict.”

Carolina missed a golden opportunity to gain some separation in the division. The Falcons lost in Baltimore, 29-7, marking Atlanta’s fourth consecutive loss. The Saints lost in Detroit, falling 24-23 after allowing the Lions to score two touchdowns in the game’s final 3:38.

The Buccaneers, who were on bye this week, gained ground on everyone in the division without even taking the field. There’s no truth to the rumor that Lovie Smith is petitioning the league to have the Bucs on a bye week for the rest of the season.

In Friday’s NFL Chat, I talked about the Rams being the one losing team with the best chance to finish season strong. They started to climb that mountain on Sunday, scoring a 28-26 win over the reigning (and flailing) Super Bowl champions.

Jeff Fisher dug deep into his bag of tricks to secure the victory, including using some misdirection on a big punt return and calling a fake punt to help run out the clock late in the game.

“We wanted to finish the game in the offensive victory formation and we did that,” said Rams quarterback Austin Davis. “You have to tip your hat to Seattle. They are a really, really good football team and you saw what it took to beat them.”

Seattle is now sitting on back-to-back losses, which were sandwiched around the shocking trade of Percy Harvin to the Jets. It will not get any easier next week, as the Seahawks travel to Carolina for a game between two squads desperate to get things pointed back in the right direction.

Seattle can take solace in the fact their division rivals, the 49ers, also lost in Sunday, getting destroyed by Peyton Manning and the Broncos, 42-17. San Francisco sits just a half-game ahead of Seattle in the standings, with the 49ers set to take their bye this week.

Too bad for both of those division heavyweights the Cardinals won again (this time in Oakland) to improve to 5-1. Arizona, at least thus far, is the clear-cut best team in the NFC West and is in the conversation for the best squad in the entire conference.

Bills’ Jackson may miss month; Spiller to have surgery

Reacting to the Polls – Week 9