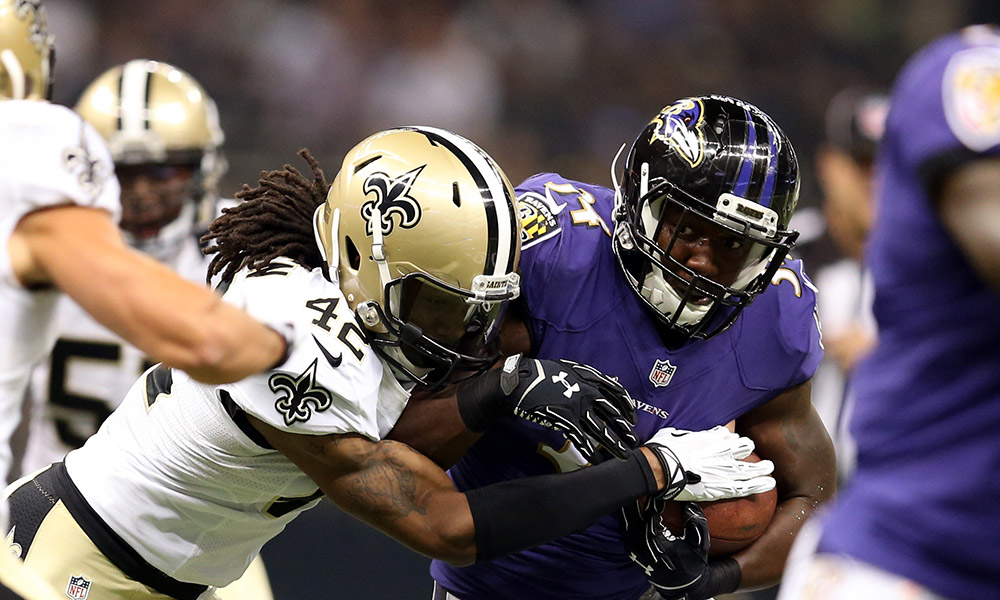 The Ravens used a playoff-tested formula to hand the Saints their third straight home defeat on Monday night: pound the rock and play suffocating defense.

Justin Forsett ran for a career-high 182 yards and a pair of touchdowns — including a 20-yard score late in the fourth quarter to essentially seal the game — and the Ravens sacked Drew Brees four times and scored on a pick-six as Baltimore carved out a 34-27 victory.

Harbaugh noted the Ravens set the tone for the game on the opening series, when Lardarius Webb chased down Josh Morgan at the end of a 67-yard reverse play to stop a touchdown. Four plays later, Haloti Ngata stuffed Mark Ingram on fourth-and-1 to keep New Orleans off the board altogether. It was a sign of things to come for Ingram, who was held to just 27 yards on 11 carries (2.5 ypc).

The Saints played desperate, seeking to move back atop the NFC South after the Falcons lost on Sunday. But the Ravens played with an even greater sense of urgency, as the Bengals and Browns both won on Sunday to maintain the torrid pace in the AFC North.

The Steelers, Ravens and Browns all sit at 7-4, just a half-game back of the division-leading Bengals. There are two other 7-4 AFC teams squarely in the playoff chase, the Chiefs and Chargers; the Ravens will host the latter next Sunday at M&T Bank Stadium.

Who knows, maybe the Lions laid down and lost to the Patriots on purpose on Sunday? While I say this in jest, you couldn’t blame them if that was the case, because earning the No. 5 seed (the top wild-card spot) in the NFC looks awfully appealing right now. That’s because the No. 5 seed will face the winner of the NFC South in the first round of the playoffs, although I used the word “winner” loosely.

Prior to the Saints loss discussed above, the Falcons dropped a 26-24 decision to the Browns when Billy Cundiff hit a 37-yard field goal as time expired. The Browns had time to march down for such an easy attempt because Atlanta coach Mike Smith inexplicably took a timeout on third-and-2 on Atlanta’s final possession a drive earlier, giving the Browns extra time to work with after a 53-yard Matt Bryant field goal put the Falcons in front with less than a minute to play.

“The 53-yarder was definitely outside the range we set prior to the game,” Smith said. “We wanted to get a first down and we felt like we had a play, that’s why we called the timeout. We came over and used it. They would’ve used the timeout probably if we hadn’t.”

One would think Smith would want the other team to use a timeout instead of burning one of his own, but that is only true if he was actually trying to win the game. And to this point, there is no evidence anyone in the NFC South is trying to win games this season.

The Buccaneers, who lost to the on-the-brink-of-implosion Bears on Sunday, are just two games back in this joke of a division. Tampa Bay is doing the impossible … competing for a division title and the No. 1 overall draft pick at the same time.

The Panthers, who had their bye this week, gained ground on everybody by staying off the field.

Rex Ryan fast-tracked the process of landing a defensive coordinator job next season by “leading” his Jets into Detroit, where they were throttled by the Bills, 38-3.

Kyle Orton was an efficient 24-for-32 for 230 yards on two touchdowns. Robert Woods was his favorite target, catching one of those scores and making a couple highlight-reel receptions.

The defense did its part, as well, with seven sacks and an interception. And the special teams even got in on the fun, as Buffalo scored on a blocked punt to bust the game wide open in the third quarter.

The Bills moved into a tie for second place in the AFC East, catching up with the Dolphins, who lost a day earlier in Denver. Buffalo is now just a game back of the herd of 7-4 teams jockeying for the AFC’s two wild-card positions.

However, any Bills fans with hopes of snapping a 14-year playoff drought should look at the team’s remaining schedule. Coming up, the Bills will host the 7-4 Browns (at a location still unknown); travel to Denver to face the 8-3 Broncos; return home to battle the 8-3 Packers; head to Oakland to get a one-week reprieve; and then wrap up the season in New England, a game the Bills can only win if the Patriots have nothing at stake.

“We really want to get to the playoffs. We’re trying to break this streak,” said Bills RB Anthony Dixon, who scored a 30-yard touchdown against the Jets. “We just rallied together and got the job done.”

The win was a big step for the Bills. But the steps between here and the playoffs are much bigger and far more daunting.