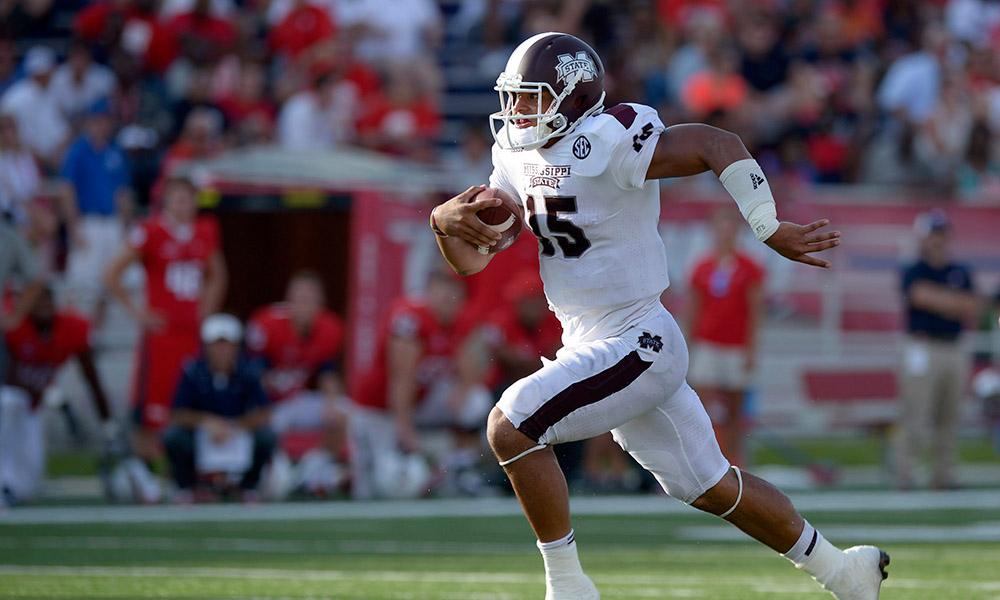 After a huge shake-up at the top of the polls a week ago, here is a look at how the Top 10 fared in week seven of the college football season:

Jameis Winston looked like the same player who ran away with the Heisman Trophy a year ago, completing 30 of 36 passes for 317 yards and three touchdowns as Florida State beat Syracuse 38-20. The FSU offense was nearly unstoppable, unless it (or the clock) stopped itself. The young defense created three turnovers and kept Syracuse out of the end zone on its only two trips inside the red zone in the first half.  THIS WEEK: The Seminoles, who have won a school-record 22 straight games, should remain atop the polls.

After its defense forced a three-and-out on the first drive of the game, Auburn committed turnovers on each of its first two offensive plays from scrimmage and, fewer than 9 minutes into the game, the Tigers trailed Mississippi State 21-0. The defending SEC champions turned the ball over four times (including two interceptions from Nick Marshall), Daniel Carlson missed a short, first-quarter field goal attempt and the offense settled for a pair of field goals in the second quarter after having first-and-goal.  THIS WEEK: Don’t expect Auburn to drop too far after losing to the third-ranked Bulldogs in Starkville.

Quarterback Dak Prescott continued his Heisman-like play, throwing for 246 yards and a score while adding 121 yards rushing and two more touchdowns in Mississippi State’s 38-23 win over Auburn. De’Runnya Wilson had 72 yards receiving and a touchdown, giving him six in as many games this season, and Josh Robinson added 97 yards rushing and two scores, his seventh and eighth of the year. The Bulldogs held the Auburn offense, which came into the game averagaing nearly 39 points per game, to just 23 points and forced four turnovers.  THIS WEEK: The win will almost certainly move Mississippi State up to No. 2.

Bo Wallace ran for two first-quarter touchdowns and passed for another, a 33-yard strike to Quincy Adeboyejo in the end zone, that gave Ole Miss a 28-7 lead with 13 seconds left in the third quarter and propelled Hugh Freeze’s team to a 35-20 win over No. 14 Texas A&M. Kenny Hill had 401 yards passing for the Aggies, but Ole Miss forced four turnovers, scored a pair of defensive touchdowns (a 75-yard interception return by Cody Prewitt and a 21-yard fumble return by Keith Lewis) and limited Texas A&M to just 54 yards rushing on 35 carries. The Rebels committed just two penalties for 20 yards and no turnovers.  THIS WEEK: Look for Ole Miss to move up at least to No. 3, and possibly jump Mississippi State, after beating Texas A&M in College Station.

Baylor trailed 58-37 after Marcus Mallet picked off Bryce Petty and returned it 49 yards for a touchdown with 11:38 to play. The Bears, however, rattled off 24 consecutive points including a 28-yard field goal by Chris Callahan as time expired to beat TCU 61-58. The football gods smiled upon Baylor late when, on third-and-10 with 31 seconds left, Corry O’Meally was called for defensive pass interference – just minutes after similar contact didn’t yield a pass interference call against Baylor. Five plays later, Callahan hit the winner. Regardless, Baylor piled up 782 total yards and 39 first downs and remained undefeated.  THIS WEEK: Baylor’s resume lacks a marquee road victory, but it is impossible to ignore the explosiveness of Petty and the offense. The Bears put themselves in prime position for a playoff spo and should move to No. 4.

Notre Dame trailed North Carolina (you read that right) 36-35 at the end of three quarters, but had a pair of 81-yard drives that took up more than 12 minutes in the fourth and resulted in 15 points and held off the Tar Heels for a 50-43 victory. It was one of the more prolific offensive performances in recent Notre Dame history as the Irish piled up 519 total yards, including 300 yards passing from Everett Golson, and 27 first downs. Notre Dame showed some composure and made plays late in the game, but shouldn’t have allowed UNC (which has now allowed 204 points during its current four-game losing streak) to hang around as long as it did.  THIS WEEK: Notre Dame might not have done enough to move into the top five, considering Auburn lost, on the road, to third-ranked Mississippi State

It wasn’t pretty – hell, it was hard to watch – but Alabama held off Arkansas (the best 3-3 team in the country) for a 14-13 win in Fayetteville. Blake Sims completed just 11 of 21 passes for 161 yards, but threw for a pair of touchdowns (including the eventual winner in the fourth quarter) and didn’t turn the ball over. The Alabama defense allowed Arkansas, which came into the game averaging 316.6 yards rushing per game, just 5 yards on 13 carries in the second half and Landon Collins picked off Brandon Allen in the waning minutes to seal it.  THIS WEEK: An ugly win is still a win, but this will likely do little more than hold Alabama’s spot at No. 7.

The Spartans jumped out to a 21-3 lead early in the second quarter and led 38-17 after three, but Purdue pulled within seven with 6:19 remaining. With the offense sputtering (just 66 yards on its last 30 plays that weren’t out of the victory formation), Darien Harris intercepted an ill-advised throw by Austin Appleby and took it 15-yards for a touchdown, securing a 45-31 win for the Spartans.  THIS WEEK: Michigan State should hold steady and No. 8 and keep itself in position for a playoff berth if it continues to win.

It seemed as though TCU, which struggled through its first two seasons in the Big 12, was going to knock off No. 5 Baylor just one week after upsetting then-No. 4 Oklahoma. But the Horned Frogs couldn’t hold on to a 21-point, fourth-quarter lead and lost 61-58. TCU has proven it can play, and perhaps more importantly score with the best the conference (and the country?) has to offer. Now, Gary Patterson’s team has to hope that Baylor stumbles down the stretch (at Oklahoma on Nov. 8?).  THIS WEEK: The loss will drop TCU out of the Top 10 and, without further carnage at the top of college football, out of playoff contention.

Arizona had no business in the Top 10 and showed that with a 28-26, home loss to USC. The Wildcats had an opportunity to win the game, thanks to three second half touchdown by Jared Baker and Anu Solomon’s 177 yards passing in the fourth quarter alone, but Casey Skowron missed a 36-yard field goal with 12 seconds left. Skowron made just 2 of 5 field goal attempts.  THIS WEEK: Head coach Rich Rodriguez has turned Arizona into an up-and-coming program, but this loss will likely end the Wildcats hopes of a Cinderella season.

Report: Brady to start for Patriots