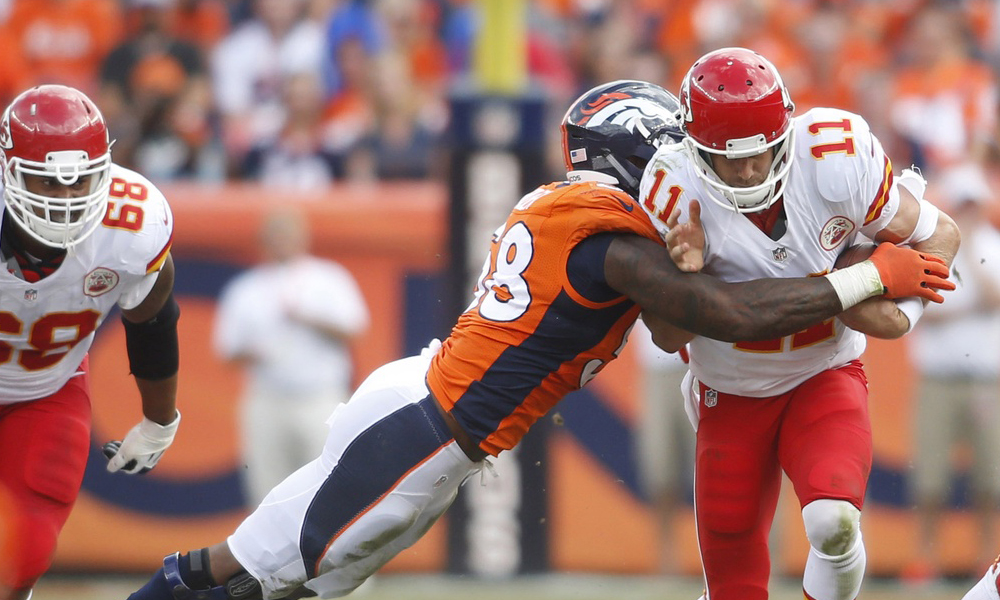 Everyone knows that Peyton Manning is one of, if not, the best quarterback in the NFL. He does an inordinate amount of things extremely well in the game of football. His intelligence, touch and feel as a quarterback are some of the best the NFL has ever seen. Nevertheless, if the Broncos get to and win the Super Bowl it will be because of the improved play of the running backs and defense.

The fact of the matter is that Manning will not be enough to beat teams like the New England Patriots in the playoffs. He needs his defense and running backs to bring their A-game to just make the playoffs.

The Broncos acquired high-profile free agents Aqib Talib, DeMarcus Ware and T.J. Ward in hopes of shoring up their below-average defense. Nonetheless, that has not been the case as the Broncos still give up 23.6 points per game through the first 12 weeks of the season. This unit must step up now.

While any defense that plays with the type of offense like Denver’s has more room for error, the Broncos’ defense needs to put together much better performances than they did against the Rams, Dolphins and Patriots in the last four weeks.

The biggest problem with the Broncos’ defense is that they don’t create enough turnovers. Through 11 games, Denver has caused 12 turnovers, which is good for 24th in the NFL.

Chris Harris Jr. put it best when he said, “We just have to force some turnovers. We’ve got to figure out a way to light a spark in the game.”

Creating turnovers is important because it creates extra opportunities for the offense to score, which are invaluable as the games get closer and tighter. The team that wins the turnover battle wins 69.6 percent of the time, which illustrates how important creating turnovers are to a team’s success.

The Broncos utilize a 4-3 under base defense, which basically means that they have four down linemen and their strong-side (Sam) linebacker lined up on the line of scrimmage. The 4-3 under defense basically looks like a 5-2 defense to the casual observer. This allows the Broncos to rush the passer in a variety of combinations with their five players on line of scrimmage and the two off the line linebackers.

While most teams that run a 4-3 under will drop the Sam linebacker to coverage for a large quantity of plays, this is not the case for the Broncos as they have one of the best pass-rushers in the league as their Sam linebacker, Von Miller. Thus far, Miller has only dropped into coverage on 17 percent of pass plays, which means the Broncos bring a great deal of five-man pressures.

This has allowed the Broncos to be extremely effective stopping the run as they are always bringing pressure. Denver only allows 75.5 yards per game on the ground, which is good for second in the league. They are also generating a great deal of pressure, as they are 12th in the league in adjusted sack rate (represents sacks divided by pass plays, which include passes, sacks and aborted snaps), per Football Outsiders.

While the Broncos’ front seven have done their job extremely well, the same cannot be said for the secondary. Chris Harris Jr. has been arguably the best cornerback in the NFL this year as he has consistently locked down opposing receivers. Nevertheless, the rest of the Denver secondary has struggled mightily, especially in their losses.

High-priced free agents Talib and Ward have failed to live up to their lofty contracts throughout the season. These two were brought in to help the Broncos against the high-powered offenses like the Patriots; however, they haven’t done that just yet.

For the Broncos to get to the playoffs and beyond, they will need much improved play from their secondary down the stretch.

As teams put most of their resources toward stopping Manning and the potent Denver passing attack, it will be paramount that a running back like C.J. Anderson makes the most of his opportunities. Since taking over for Montee Ball, Anderson has made the most out of his opportunities. In the last three games, Anderson leads the NFL with 24 first downs, as he gets a first down on 36.9 percent of his touches, and 473 all-purpose yards.

In regards to Anderson’s performances, Denver head coach John Fox said, “He’s done a tremendous job all year. It’s a position that we’ve had some injuries in. We’ve rotated guys through there and whoever has gotten their opportunity has responded and C.J. has been no different. He does a good job—he’s pretty shifty, he can make guys miss in the open field, whether it’s in the passing game off short catches or in the run game. That’s kind of a skill set that I think he’s good at.”

When a team can establish the run, it makes anything the offense or defense does a lot easier. A great rushing attack allows an offense to control the ball and eat up the clock much better than when a team is one-dimensional. If an offense has the ball longer, that means the defense isn’t on the field as long, which leads to a fresher defense that plays near their optimum levels for a much larger percentage of a game. It also allows the offense to wear on opposing defenses, which leads to them being more effective later in the game.

This was clearly evident in the Broncos’ 39-36 win over the Dolphins. The Broncos only scored 17 points in the first three quarters; however, they exploded for 22 points in the fourth quarter as they had 34:17 of possession in their come-from-behind victory against Miami. The Dolphins’ defense started to get fatigued once the fourth quarter started and that is when the floodgates opened as Denver took full advantage.

The common link in the Broncos’ three losses has been their lack of a running game. In the three losses, Denver rushed for just 107 yards combined or an average of 35.6 yards per game. To put it frankly, that is just abysmal.

The reason for those struggles has largely been on the Broncos’ offensive line. Against the Rams, Patriots and Seahawks, the offensive line failed to get much movement on the line of scrimmage, which has led to tighter running lanes and less yards to be made.

The Broncos’ running backs are not the type of running backs who can improvise and turn runs that should be for no gain into a big gain. These running backs are great at getting the amount of yards that are blocked. This means that they are extremely reliant on the offensive line for their success.

Right now, the Broncos don’t have a lot of wiggle room to even get in the playoffs. They only have a one-game lead in their division and the wild card. It’s going to be tough down the stretch, as they play four teams with a .500 record or better in the last five games.

If the Broncos hope to get to the playoffs and make a deep run, they will need their defense and running game to be consistently productive throughout the stretch run.