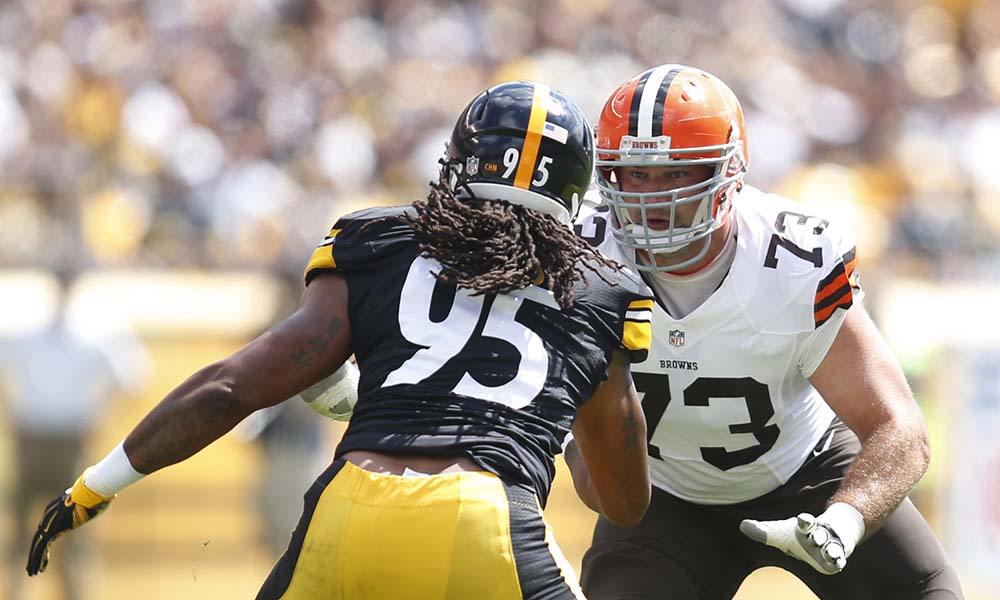 There is something majestic about a group of people working in cohesion to accomplish a set of difficult tasks. Whether it’s in the business world or the NFL, the group must be in sync and work as one or they will fail. The Cleveland Browns’ offensive line has mastered this paradigm.

These tasks are hard enough; however, if you couple them with the fact that they will have to perform these assignments against the finest athletic marvels the NFL has to offer and the wide range of stunts and blitzes defensive coordinators throw at them, they become near-impossible.

How do you stop someone who has comparable strength with yours, but is twice the athlete from getting past, around or through you?

The best offensive linemen are the true technicians in the NFL. If they open their stance three inches too wide they will get beat inside, if they don’t open their stance enough, they will get beat outside, and if they put any weight on their heels, they are going to get bull rushed onto their back. A great offensive lineman must utilize incredible balance, footwork, strength, quickness, discipline and intelligence on every single play or they have a chance to fail on any given play.

The Browns offensive linemen have the unique distinction of having five players who combine all these traits into one.

Brian Hoyer has done a much better job as the Browns quarterback than many expected. One would assume this is due to some change Hoyer has made in his mechanics or decision-making; however, this is largely due to the fact that Hoyer has had a ton of time in the pocket thanks to the stellar pass protection from his offensive line. The Browns offensive line has only allowed two sacks and eight hurries through the first three games of the season, which has led the Browns having the second best pass-blocking efficiency per Pro Football Focus. The Browns offensive line is not a one trick pony; however, as they have been the main reason behind the Browns averaging 132.7 rushing yards per game. The Browns utilize offensive coordinator Kyle Shanahan’s zone-blocking scheme in the running game. This requires the linemen to be able to perform a reach block on the play-side, a scoop block on the back side, and get to the second level of the defense to open cut back lanes for the running backs to explode through.

The Browns offensive line is led by All-Pro left tackle Joe Thomas, who has only given up eight sacks in the last three years. Thomas is one of the few offensive linemen, who have mastered the reach block, one of the most difficult blocks for an offensive lineman. If a defensive end is lined up on the outside shoulder of the left tackle, a reach block would require the left tackle to take a hard 45 degree step to his left across the defensive ends body, then the tackle must get het one hand on the defenders outside sleeve with the other hand in the inside armpit. The tackle must then get in good balance and drive his feet while pushing hard with his arms to push the defensive lineman in a 45 degree angle from the line of scrimmage, which should create a running lane for the running back. Thomas is an amazing technician who always does exactly what is asked of him, which has led him to be one of the top-three tackles in the NFL.

Lining up at left guard next to Joe Thomas is rookie Joel Bitonio, who has acquitted himself much better than a rookie should, thus far. Bitonio has incredibly quick feet, an effective punch and great fundamentals, which allow him to do his job at a high level regardless of what the defense throws at him. One of the aspects of blocking that rookies really struggle with early in their career is blocking defensive linemen who are executing a stunt. This requires a great deal of intelligence, footwork and awareness to accomplish because it requires a player to initially engage with a defensive lineman, pass him off to one of his offensive lineman teammates, then block the defensive lineman who is stunting into his gap. While a rookie lineman is usually the weak link of an offensive line, Bitonio has proved that he is one of the strongest links in the chain.

The brain of any offensive line is the center. The center is the player who makes any protection or assignment calls on the offensive line. He must have an acute understanding of what the rest of the offensive linemen are doing, along with the tendencies and keys on the defense and make calls accordingly. Cleveland Browns center Alex Mack does this extremely well, because is an extremely intelligent player who matches it with sound technique.

While the left side of the Browns offensive line is their strength, right guard John Greco and right tackle Mitchell Schwartz are no slouches.

The Browns average 6.6 yards per carry when they run behind John Greco per PFF. Greco has done a fantastic job through the first three games of the season. He has done an outstanding job in pass protection along with run blocking. He does a great job of getting the second level of the defense and has helped spring many of the Browns best runs of the year.

Right tackle Mitchell Schwartz has improved incredibly with his pass blocking from last year to now. Last year, Schwartz had trouble with his balance and footwork in pass protection last year; however, he has done a great job of getting to his kick step and anchoring against power. Even though Schwartz is doing a fantastic job in pass protection, he struggles at times in the run game. Schwartz struggles with his backside blocks at times and allows some backside penetration.

The epitome of this group’s impressive run blocking comes in the third quarter against the New Orleans Saints. The Browns are lined up at the Saints nine-yard line and it is second down. The Browns are in a singleback formation with a tight end lined up inline next to Joe Thomas. At the snap, the entire offensive line takes a lateral left step in unison. Left tackle Thomas executes a combo block with Bitonio as he performs a chip block, to give Bitonio time to execute his reach block on the right defensive end, and works to the second level where he blocks a linebacker. Simultaneously, Mack gets one hand on nose tackle and works to the second level to block the inside linebacker. Greco performs a beautiful cut block on the nose tackle as Schwartz gets to the second level and get just enough contact with the outside linebacker to open up a huge cutback lane for running back Terrance West, who runs into the end zone while barely being touched.

If it weren’t for the lack of talent at the skill positions, the Browns offense could be an elite unit because of their stellar offensive line play.