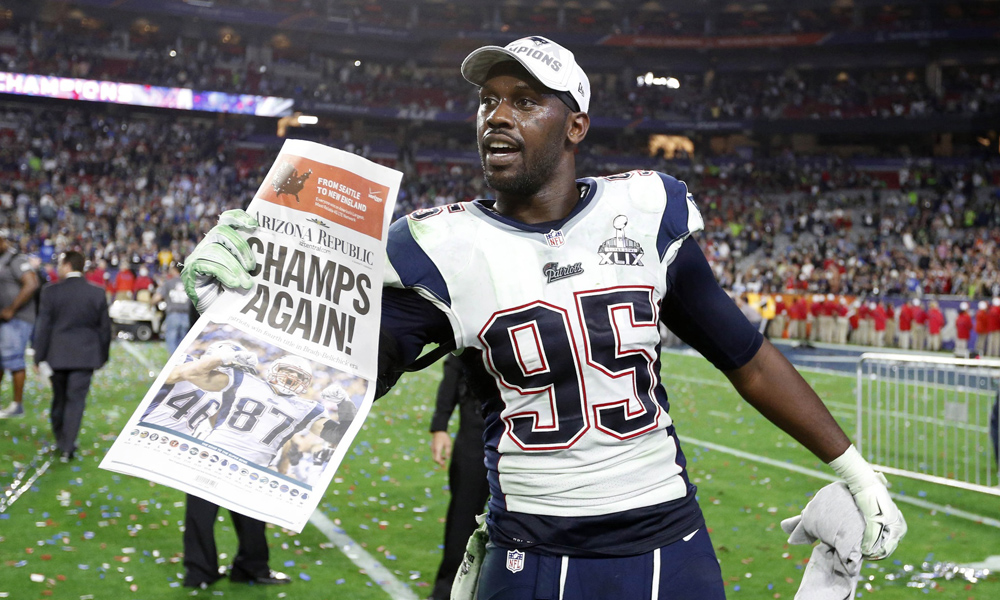 GLENDALE, Ariz. — Quarterback Tom Brady won his fourth ring — and third MVP — tossing four touchdown passes to lead the New England Patriots over the Seattle Seahawks 28-24 in Super Bowl XLIX at University of Phoenix Stadium on Sunday.The Patriots clinched the game defending their own end zone in the final 30 seconds of the game.

The Seahawks got the ball back with 2:02 left and opened with a 31-yard pass down the left sideline from quarterback Russell Wilson to running back Marshawn Lynch. After another first-down conversion on a Wilson pass to Ricardo Lockette, Seahawks wide receiver Jermaine Kearse caught a 33-yard bomb down the right sideline. Going up for the ball with Patriots cornerback Malcolm Butler, Kearse tipped the ball and caught it on a second bobble while on his back at the 6-yard line.

The Seahawks ran Lynch on first down to reach the 1-yard line with 25 seconds left. Wilson then fired a slant to Lockette that Butler stepped up on and intercepted to seal the game.

On his 50th pass attempt of the game, Brady tossed an easy 3-yard score to wide receiver Julian Edelman in front of Seahawks reserve cornerback Tharold Simon, and the Patriots reclaimed the lead, 28-24, with 2:02 left in the game.

Brady connected on all eight of his passes on the drive that began when the Patriots forced a three-and-out on a 48-second possession by Seattle.

Earlier in the fourth quarter, Brady completed third-down passes of 18 and 21 on a balanced drive that culminated with a 5-yard dart to wide receiver Danny Amenolda with 7:55 left in the game to cut the Seahawks’ advantage to 24-21.

By scoring 10 unanswered points and recording their second interception of Brady, the Seahawks built a 24-14 lead in the third quarter.

Former Canadian Football League wide receiver Chris Matthews was the surprising star of the game for the Seahawks, making his first four NFL receptions for 109 yards. His 11-yard reception in the final seconds of the second quarter tied the game at 14, and he made a leaping 45-yard grab on the opening possession of the third quarter, which ended in a 27-yard Steven Hauschka field goal and Seattle’s first lead of the game, 17-14.

Seattle went right to Matthews for a gain of 9, then got inside the red zone on a thunderous run by Lynch, who broke five tackles on a 14-yard gain to the Patriots 4. On second-and-goal, Wilson had only open grass around wide receiver Doug Baldwin for a 3-yard scoring pass and 10-point edge with 4:54 to go in the third.

Wilson completed 12 of 21 passes for 247 yards with two touchdowns and one interception.

Seattle answered two touchdown passes from Brady to tie the game at 14 heading into halftime.

Lynch (24 carries, 102 yards) powered for a 3-yard touchdown to even the score at 7 just before the two-minute warning.

Brady, who completed a Super Bowl first-half record 20 passes (on 27 attempts) for 177 yards through two quarters, lofted a 22-yard touchdown to tight end Rob Gronkowski with 31 seconds left in the half to tie Joe Montana’s record for touchdown passes in the Super Bowl with 11. Brady threw an 11-yard touchdown pass to wide receiver Brandon LaFell to give the Patriots a 7-0 lead earlier in the second quarter.

After a personal-foul penalty on New England with six seconds left in the half moved the ball to the Patriots 11-yard line, the Seahawks took a timeout and pulled their field-goal unit off the field. Wilson whipped a fade to Matthews to tie the game at 14.

Wilson was 0-for-1 passing and the Seahawks had only 22 total yards when Seattle started its first scoring drive in the middle of the second quarter. Wilson completed back-to-back passes, with a 44-yarder to Matthews, his first career NFL reception, landing the Seahawks at the New England 11. Lynch carried three straight times in the four-minute, 51-second drive that was capped by his 3-yard romp.

Brady was intercepted by Jeremy Lane in the end zone on the 13th play of the Patriots’ second drive of the game, giving the ball back to the Seahawks with 1:39 left in the first quarter. Lane broke his arm on the 14-yard return.

NOTES: Patriots QB Tom Brady captured his fourth Super Bowl championship, joining Hall of Famers Terry Bradshaw (Pittsburgh Steelers) and Joe Montana (San Francisco 49ers) for the most wins by a quarterback in history. Brady increased his NFL record for postseason touchdown passes to 53, and he broke the Super Bowl career record with 13. Montana had 11. Brady also tied Montana with three Super Bowl MVP awards. … The NFL held a moment of silence prior to the national anthem for New York Giants co-owner Ann Mara, who died Sunday at age 85. … New England played in two of the three Super Bowls in the state of Arizona, including Sunday and the 2008 loss to the New York Giants in the same stadium. Super Bowl XXX in 1996 was played in Tempe. … Seahawks QB Russell Wilson became the first quarterback to start two Super Bowls in his first three seasons. Wilson was attempting to become the first quarterback to win two Super Bowls by age 26 since Dallas Cowboys Hall of Famer Troy Aikman. … The Patriots’ Bill Belichick tied former Steelers coach Chuck Noll as the only coaches to win four Super Bowls.