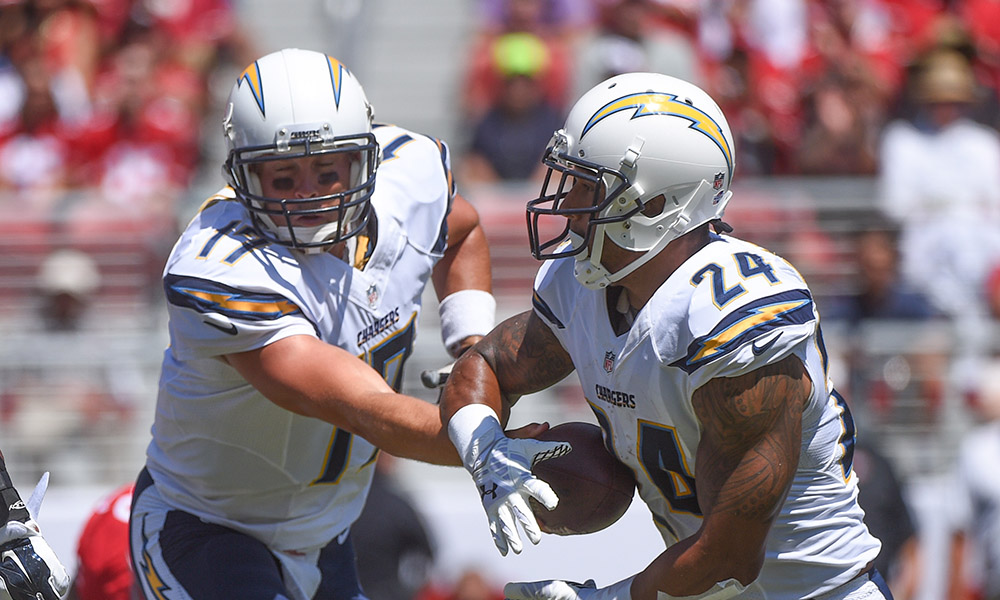 There are seven one-loss teams in the league right now. Of those seven, the reigning conference champions — the Seahawks and Broncos — are considered by most to be the NFL’s top teams. A couple of NFC East teams — the fast-paced Eagles and the suddenly balanced Cowboys — are also generating a lot of buzz. But through the first five weeks of the season, the Chargers are playing better ball than anybody.

It took a while for Mike McCoy to make his imprint on the Chargers after taking over as head coach last season. But once San Diego hit its stride under McCoy, it never looked back. The Chargers have won nine of their last 11 games,  including the playoffs, a stretch that includes victories over the Broncos, Seahawks and Bengals.

Philip Rivers is playing at an MVP level. He leads the league in passer rating (116.3) and has thrown 12 TDs against just two INTs. This offense plays to his strengths, allowing him to exploit match-ups and get the ball out of his hand quickly. That is a big reason he is completing over 70 percent of his passes (70.3), tying him for the league lead in that category with Russell Wilson.

“He’s a special player,” McCoy said of Rivers. “He’s playing lights out right now. Since Philip’s been in the league he’s been one of the best quarterbacks in the league. It’s not just this year or last year. I think he’s been one of the top quarterbacks for a number of years. Since he’s been the starting quarterback here he’s been pretty efficient, year in and year out. He deserves all the credit he gets. He’s a very good football player and we’re very fortunate to have him as the leader of our organization.”

Rivers has carried the offense through the first quarter of the season, but help is on the way. Ryan Mathews, coming off a 1,255-yard campaign in 2013, is expected back from a sprained MCL in a couple weeks. In his absence, rookie Branden Oliver has emerged as a big-time playmaker; Oliver had 182 yards from scrimmage and a pair of scores in last week’s 31-0 domination of the Jets.

San Diego’s ability to run the ball is vital, especially when the Chargers face the Broncos in a pair of games that could decide the AFC West. Last season, when the Chargers went into Denver and won (the only visitor to win in Denver), they dominated time of possession, 38:49 to 21:11. One of the reasons they failed to replicate that feat in their postseason rematch was Mathews was unable to go with an ankle injury. If San Diego can run the balanced offense it prefers, it can keep Peyton Manning on the sidelines and seize control of the AFC West.

For all the good work being done by San Diego’s offense, the defense has gone largely unnoticed. The Chargers have the highest ranked defense in the AFC and are one of just three teams allowing less than 300 yards per game. Of course, it helps that San Diego’s defense is on the field for just 25:56 per game; only the Colts and 49ers spend less time with their defenses on the field. That, again, is a testament to San Diego’s offense and its ability to control the clock and the tempo of games.

But the Chargers have real playmakers on defense. Free-agent acquisition Brandon Flowers (two interceptions, five pass breakups) has been stellar. Also, this year’s top two draft picks, CB Jason Verrett and LB Jerry Attaochu, are off to strong starts and have the potential to be special players.

“We have a group of mature guys, guys who have been in the defense a little longer,” SS Marcus Gilchrist told reporters this week. “We understand exactly what we need to do and at what times in the games we need to do it. I think it’s just a maturity thing of guys growing up and understanding what we have to get done.”

These Chargers are maturing quickly indeed. Just midway through the second season of what was thought to be a three- or four-year rebuilding plan for McCoy and GM Tom Telesco, San Diego has already emerged as the best team in the league.

Redskins miffed at media for being called lax