While the season-ending injury to quarterback Teddy Bridgewater, and the equally serious seeming injury to running back Adrian Peterson might have sunk the Minnesota Vikings’ season, their defense has carried the team on its shoulders.

We knew the defense would be good in its third year under head coach Mike Zimmer and defensive coordinator George Edwards, but this good?

After improving in both of the first two years, Zimmer’s defense is currently ranked as the third best NFL defense overall by Football Outsiders’ DVOA metric, with strong showings against both the run and pass.

The Vikings are doing it through great play by their defensive line and pass rushers, as well as good coverage from the secondary.

Of course, one has a lot to do with the other—if you’re front seven is getting after the quarterback, your secondary will be more effective as they have to hold coverage for a shorter period of time. 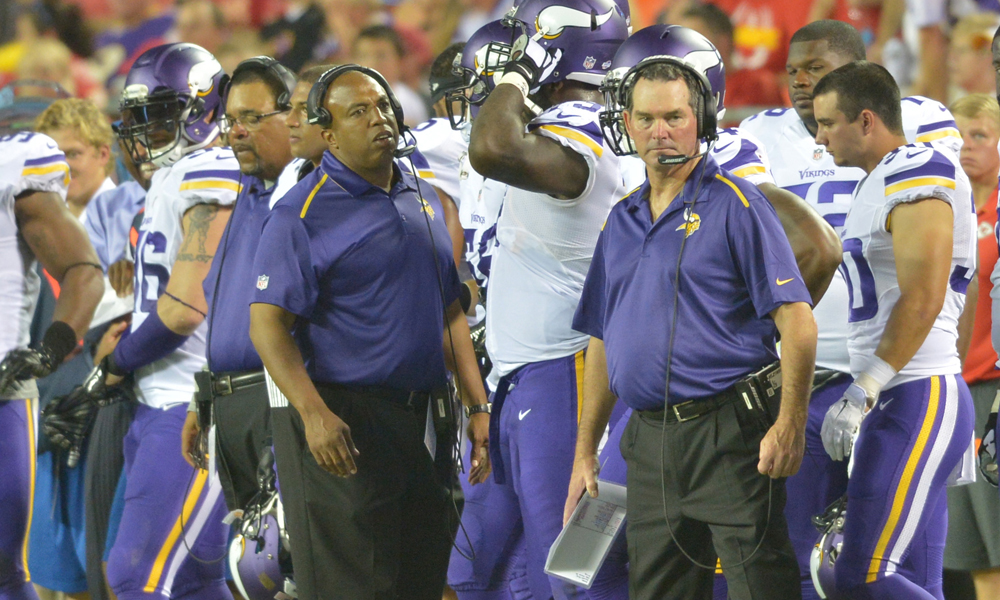 Two of the three interceptions the Vikings generated against the Carolina Panthers were a combination of great pressure and good coverage (the third was a Hail Mary at the end of the first half and was just underthrown).

On the first, a pick thrown near the end of the third quarter, Panthers quarterback Cam Newton found himself facing a 3rd and 11 on his own 33 yard line. With such a long distance to go, the Vikings had no real worry about a run, especially as the Panthers spread out with five receivers.

The formation was “trips right” (meaning the Panthers had three receivers to the right of their offensive line) and Newton worked out of the shotgun. Just before the snap, the Panthers pulled Greg Olsen into the backfield from the right side.

The Vikings stacked the front line with four down linemen and two linebackers. The linebackers looked like they were going to crash the “A” gap on either side of the center but they didn’t.

Instead, at the snap, one linebacker (Emmanuel Lamur) dropped into coverage across the middle while the other (Eric Kendricks) followed Olsen into the flat.

Terence Newman did a nice job undercutting Ted Ginn Jr’s route, and picked off the pass from Newton.

The combination of pressure and coverage worked very well in this case as it did limited Newton’s choices during his initial reads, and then forced him to throw a pass before he could make all his progressions.

With the pressure coming, Newton didn’t have time to look to his left, where the coverage on receiver Kelvin Benjamin had fallen down, leaving Benjamin wide open.

Part of the reason this worked so well is where those linebackers lined up, in the “A” gap. Because the Vikings had been successful pressuring Newton in the second half of the game, Newton knew there was always a threat that one or both of those linebackers could come crashing in. That look—one of many that Zimmer threw at Newton—kept Newton from being totally sure how much time he would have and what adjustments he would need to make at the line.

Similarly, on Newton’s final interception, the Vikings again stacked the line and this time the Panthers kept in extra blockers for protection. Minnesota stacked eight men on the line, this time with linebackers Chad Greenway and Anthony Barr standing in the “A” gap.

Barr dropped out into coverage as Greg Olsen went out for a pass, but Greenway crashed the gap, pulling the attention of the guard. The ripple effect was the left tackle was responsible for the defender head up on him, while the remaining blocker, tight end Ed Dickson, had to choose between blocking Everson Griffen or corner Marcus Sherels.

He chose Sherels, which allowed Griffen a clear path to Newton who made an ill-advised decision to throw the ball up into the air, where it was intercepted by one of the many Vikings linemen standing around.

Aside from having great players all over the defense, the Vikings benefit from constant pressure created by multiple looks which allow the team to leverage that pressure from multiple directions. Added to the excellent coverage provided by the secondary, and it’s easy to see why the Vikings are undefeated three weeks into the season.