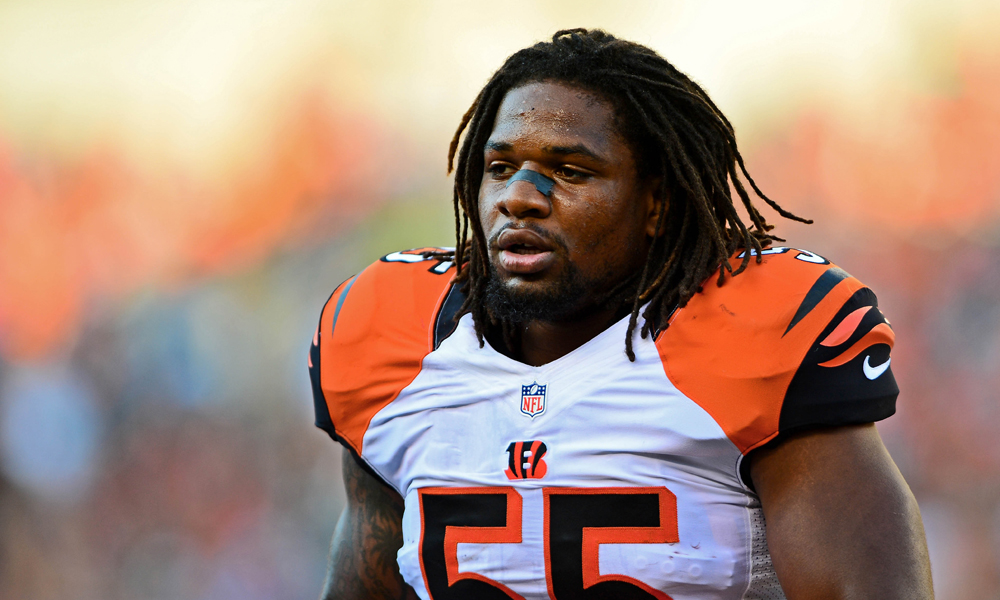 Find out about Vontaze Burfict’s history of fines and what the next one could lead to, as well as some surprising stats.

Burfict’s plays drew the ire of both Newton and Olsen as both had been battling ankle injuries at some point this season.

This isn’t Burfict’s first indiscretion since coming into the league as an undrafted rookie in 2012. Burfict was reportedly fined three times in 2013, two of which came in a game against the Green Bay Packers. Burfict was fined $10,000 for hitting Packers tight end Ryan Taylor in the groin, and then $21,000 for hitting a defenseless James Jones. Burfict was then fined later in the season for spearing former New York Jets wide receiver Stephen Hill.

“No, the guy plays extremely hard,” Pagano said of Burfict. “He’s a really good football player. Got a ton of respect for him. He’s tough. He’s hard-nosed. He’s downhill. He can run. He can cover. He’s everything you want in a linebacker.

“It’s our job just to make sure we get a hat him, we take care of him and we don’t let him wreck the game. Because he’s more than capable of doing that whether it’s sideline to sideline playing the run, playing the pass, blitzing, whatever it is. He’s a great player. So I’m not worried about any of that stuff. I’m just worried about trying to get him blocked.”

The 2013 Pro Bowler is officially on notice as dirty plays may have been encouraged in the past, but not in today’s game. In a league with no guaranteed contracts, players need to respect each other’s health and a player as talented as Burfict can play the game cleanly and at a high level.

It’s likely that Burfict’s next play that’s deemed as dirty will result in a suspension.

Here are some interesting stats from the first six weeks of football.

– Aaron Rodgers has successfully allowed the Green Bay Packers fans to “relax.” Since Rodgers gave that instruction to the fans, the team has won three consecutive games and he’s thrown for 10 touchdowns without an interception.

– The Washington Redskins haven’t had a lot of success on the field as they boast a 1-5 record, but DeSean Jackson continues to be a big play machine. Jackson caught a 64-yard touchdown pass during Sunday’s 30-20 loss to the Arizona Cardinals. The catch was Jackson’s third of the season that went for 60 or more yards. Since 2008, Jackson leads the NFL with 15 touchdowns of 50 or more yards. Calvin Johnson is second with 13 touchdowns of 50 yards or longer.

– It seemed like things couldn’t get worse for the Tampa Bay Buccaneers a season ago. After all, they started the season by losing their first eight games, they had a MRSA outback and they had an embarrassing leak of personal medical information for quarterback Josh Freeman before his eventual release. However, this season’s Bucs team hasn’t been much better. This year, Tampa Bay’s defense under Lovie Smith – a noted defensive coach – has allowed 72 more points than at this time last season. They are on a pace to yield the most points in NFL history.