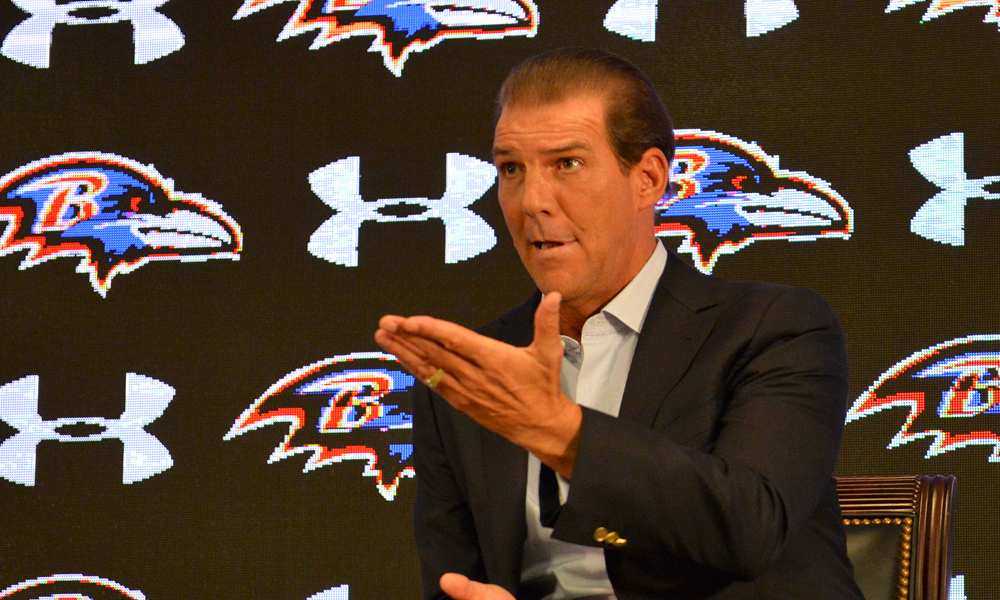 Baltimore Ravens owner Steve Bisciotti addressed the media on Monday, just three days after an ESPN Outside The Lines report diagrammed how the Ravens attempted and succeeded to dictate the NFL’s punishment on Ray Rice and how they knew about the contents of the infamous elevator video.

Bisciotti refuted the contents of the report that contained over 20 sources within the league, the Ravens organization and Rice’s camp.

It may be true that many of the sources came from Rice’s camp, but what sort of story would the Ravens give? Bisciotti referenced his team’s integrity and character coming into question, and they are legitimate questions.

One of the keys from the second-youngest owner in the NFL’s statement was that he was surprised at the length of the Rice suspension, which directly contradicts the ESPN report that the Ravens lobbied for lenient punishment from the league.

“I expected four or six games, I was surprised as everyone else that it was two,” Bisciotti said.

The report in question asserts that Ravens management actively lobbied to get Rice the suspension he initially received.

“We can’t lead this investigation and step on the prosecutor’s shoes and the NFL,” Bisciotti explained. “We can’t do it.”

If that’s the case, why did Ravens general manager Ozzie Newsome and team president Dick Cass accompany Rice and his wife, Janay, to New York to speak with NFL commissioner Roger Goodell?

Bisciotti spoke about the elevator video that TMZ released and admitted that his team should have done more in regards to uncover all the evidence.

“I’m sorry that we didn’t push harder to get that tape,” Bisciotti conceded. “It seems to me certainly in hindsight that we had the leverage.”

Goodell spoke a different tune in his press conference last week as he said that there wasn’t a way to get the elevator video, an assertion that seems laughable at best and dishonest at worst.

Bisciotti seemed to be more forthcoming than Goodell, but there are still several holes in both of their stories. Although this acts, looks and smells like a cover up, there are still questions about the league’s motivation to cover up for a running back on a team that averaged 3.1 yards per carry in 2013.

Chargers Lose Woodhead For The Season

With wins over the Seattle Seahawks and Buffalo Bills in the past two weeks, the San Diego Chargers have been one of the most impressive teams in the NFL. Philip Rivers is playing at an MVP level and he’s making everyone around him better.

Rivers will have one fewer weapon to work with as the diminutive utility back Danny Woodhead was placed on injured reserve after suffering a high ankle sprain and a broken fibula in Sunday’s 22-10 victory over the Bills.

“Tough situation for our entire team,” Chargers head coach Mike McCoy explained when asked about the Woodhead injury. “We’re going to put him on IR. Danny means a lot to our organization. The love he has for the game, the way he plays, the love he has for his teammates… He’s a true professional and we have to move on.”

The Chargers will move on by giving Donald Brown more touches. Brown was signed as a free agent in the offseason from Indianapolis to complement the now injured Ryan Mathews. Brown was busy, yet unproductive on Sunday as he toted the rock 31 times for 62 yards and had five catches for 27 more in McCoy’s short passing attack.

“It’s next man up and Donald showed he could do that this week,” McCoy said. “He did an outstanding job with the number of touches in 60 snaps and he just hung in there and didn’t want to come out of the game and made the most of his opportunity.”

San Diego doesn’t have another scat back like Woodhead and former Chargers practice squad running back Marion Grice was just plucked away by the Arizona Cardinals. It’s likely that San Diego will make a move this week to add depth at the position. Some names to keep in mind are LaRod Stephens-Howling, Michael Bush, Tashard Choice and Brian Leonard.