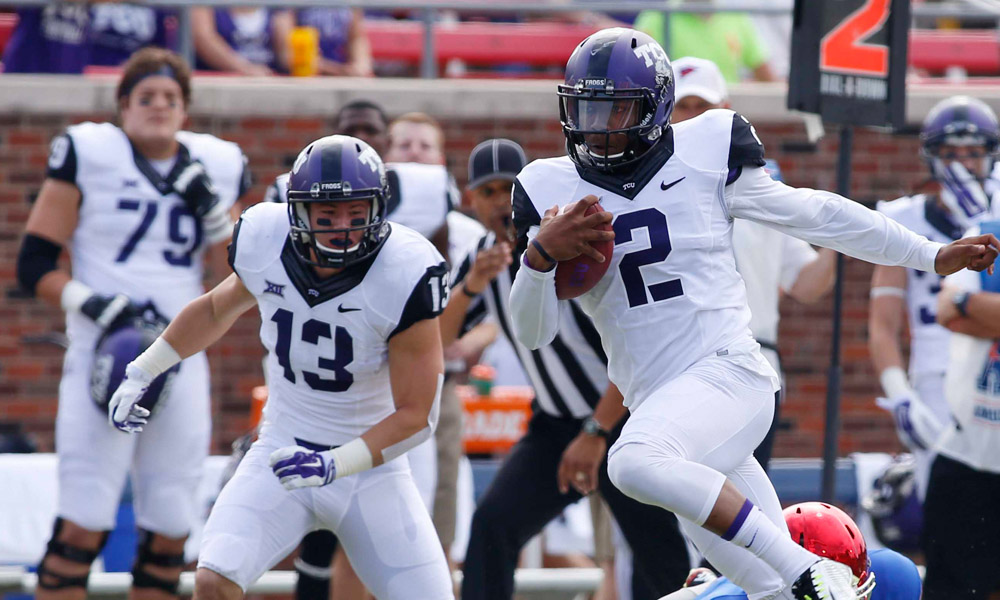 I know, I know. Fall isn’t even two weeks old and conference play is just getting underway, but this Saturday could define the season for a rising team and its emerging star.

TCU, and its quarterback Trevone Boykin, is off to a 3-0 start after going 4-8 in 2013 – its first losing season since 2004. With a top-flight defense (a staple under head coach Gary Patterson) to go along with a revamped offensive scheme – under first-year, co-offensive coordinators Sonny Cumbie and Doug Meacham – the Horned Frogs have the look of Big 12 and, thus, College Football Playoff contenders.

One of only three programs to lead the nation in total defense in three consecutive seasons (2008-10) – the defense has also been tops in the country in five of the last 14 campaigns – it is no surprise that Dick Bumpas’ unit is off to another terrific start.

The Horned Frogs, who rank second nationally in both yards (219) and points allowed (7.0) per game, have had at least one defensive player selected in each of the last six NFL Drafts (especially impressive considering the TCU defense returns eight starters from a year ago). Opponents are averaging a paltry 2.1 yards per rush while completing less than 50 percent of pass attempts thus far in 2014.

What has been most impressive about the team’s terrific start to this young season has been the explosiveness and consistency of what had been, in season’s past, a pedestrian offense – particularly against top defenses.

Despite putting up some eye-popping offensive numbers during its time in the Mountain West Conference, TCU hasn’t ranked in the Top 65 nationally in either scoring offense or total offense since joining the Big 12 prior to the 2012 season.

Cumbie was once the trigger-man for Mike Leach’s ‘Air Raid’ offense during its heyday at Texas Tech before – following a professional career that included a brief stint in the NFL – joining the staff as a graduate assistant and, eventually, becoming co-offensive coordinator and receivers coach under Kliff Kingsbury prior to the 2013 season.

Meacham served as quarterbacks coach and co-offensive coordinator at Houston in 2013, and spent eight seasons (2005-12) on the offensive staff at Oklahoma State. He received that gig after he was the architect of record-setting offenses at Jacksonville State, Henderson State and Samford, beginning in 1997.

The additions of Meacham and Cumbie have brought a more modern approach on the offensive side of the ball, focusing on spreading out the defense – vertically, horizontally and diagonally – through alignment and route combinations, while applying pressure on the defense with an up-tempo, no-huddle attack.

While the results have been exactly what the doctor ordered – to the tune of 532 total yards (15th in the nation) and 44.7 points (10th) per game – a new offensive scheme would have been a moot point without the right quarterback to execute it.

In the midst of Casey Pachall’s suspension – and impending dis-enrollment from school following a DUI arrest on Oct. 4, 2012 – Boykin moved into a starting role as a redshirt freshman, taking the reins of a ranked team that was 4-0 . He finished the season with more than 2,000 yards passing and 417 yards rushing, third most on the team.

Boykin started the season-opener against LSU at wide receiver but, when Pachall went down with a broken arm the following week (he would miss five games), Boykin found himself, once again, under center.

The 6-foot-1, 205 pound sophomore would start six games at quarterback over the remainder of the season while becoming the only player in the country to record a 100-yard rushing game, a 100-yard receiving game and a 200-yard passing game in 2013. The versatile Boykin finished second on the team in passing yards (1,198) and rushing yards (313) and fifth in receptions (26). Boykin’s seven rushing touchdowns, seven passing touchdowns and 14 totals scores led the team.

Pachall moved on to the Canadian Football League and after the transfer of former Texas A&M signal caller Matt Joeckel to TCU, there was talk about the possibility of Boykin moving back to receiver this season.

The dual-threat quarterback eventually won the job and has responded by leading TCU back into national relevance while ranking ninth in the nation in total offense (347.0 yards per game) and accounting for 11 total touchdowns (eight passing, three rushing) with just one interception. His completion percentage has risen nearly five percentage points from a year ago, to 64.2 percent, and his Adjusted Quarterback Rating (QBR) is up nearly 30 points, to 71.3. That is higher than those of Christian Hackenburg (Penn State), Connor Halliday (Washington State), Hutson Mason (Georgia) and Sean Mannion (Oregon State), all of whom were named to the preseason watch list for the Davey O’Brien Award, which is given annually to the best quarterback in college football.

While still very much a longshot, Boykin’s outstanding start – and that of his team – has propelled the quarterback into the Heisman Trophy race.

The undefeated start, Top 25 ranking, new-found explosiveness on offense by TCU and surprising individual numbers by its quarterback will mean nothing if the Horned Frogs can’t continue to produce against the best teams in the Big 12.

TCU hosts perennial power Oklahoma on Saturday, which is one of the favorites to reach the College Football Playoff.

The Sooners have won both games in the series as conference foes, while limiting TCU to 34 combined points (although Oklahoma has only scored 44).

Boykin, on the other hand, has accounted for all four Horned Frogs’ touchdowns (one passing and three rushing) in those games, as well as the team’s lone turnover – on a strip sack.

TCU’s conference title, and playoff, hopes – as well as Boykins’ Heisman candidacy – likely hinge upon the results of Saturday’s match-up with Oklahoma.

Patterson’s team is no stranger to big games, going 47-5 from 2008-11. The Horned Frogs appeared in back-to-back BCS Bowl games and, after going 13-0, finished the 2010 season ranked No. 2 in both the Associated Press and the Coaches Polls. With a new offensive philosophy and dynamic playmaker under center, TCU and Boykin just might shock the college football world.