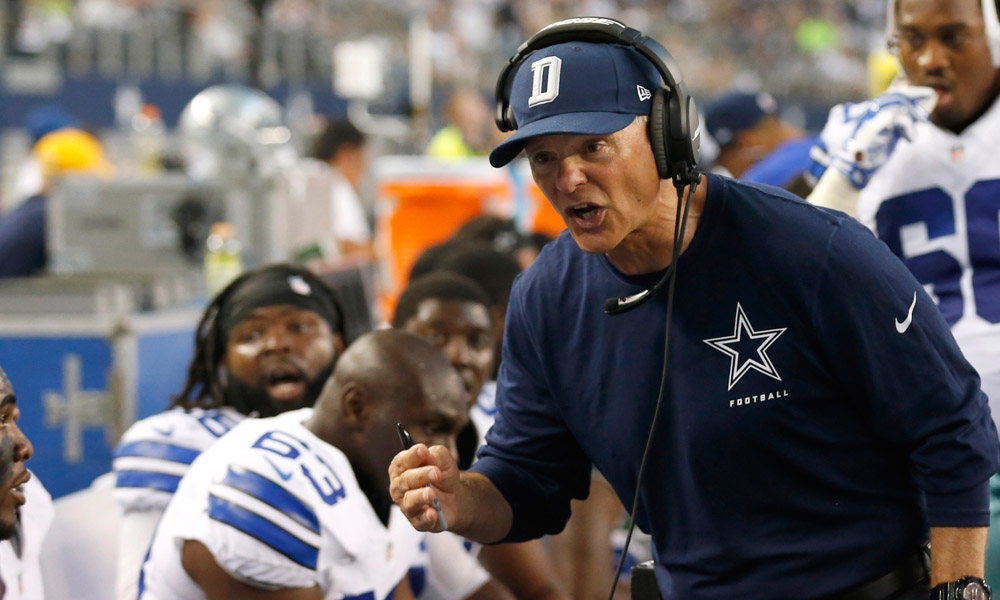 If there were a Coach of the Year award for the first four games of the season, Dallas Cowboys defensive coordinator Rod Marinelli should be your first choice.

Coming into the season, Marinelli took over a Cowboys’ defense that was historically bad. It was rated as the worst defense by nearly every metric known to man. To make matters even worse, Dallas lost their three best players on that side of the ball from last year in Jason Hatcher, DeMarcus Ware and Sean Lee.

That is the recipe for disaster.

However, through the first four weeks, the Dallas defense has played extremely well. The Cowboys are tenth in points allowed per game and most importantly, if you ask Rod Marinelli, they are the 11th ranked defense, according to the Aikman Efficiency Rating (a way to measure a defense effectiveness using seven distinct statistics in five categories).

How has Marinelli improved so drastically without three of their best players from a year ago?

First off, Marinelli has made a couple a few schematic changes.

One of the changes Marinelli made was to the weak-side or “Will” linebacker. The change requires the “Will” to play behind (or ‘covered) by the 3-technique defensive tackle. This allows the “Will” to move more to the ball without having to engage with blockers immediately.

The other major schematic change Marinelli made has to do with the cornerbacks. Last year, the cornerbacks played a great deal of zone coverage, which didn’t utilize their strengths very well. This season the Cowboys are not only playing more man coverages, but they are also playing zone coverages that have man-coverage concepts. The two coverages the Cowboys play the majority of the time this season are Cover-1 and Cover-3. Without getting too complicated with the nuances of the defense, Cover-1 basically means there is a safety charged with covering the deep middle zone, while all the other underneath defenders are in man. This defense plays to the cornerbacks’ benefit by allowing them to get in press-man and utilize their physicality to blanket receivers.

However, this is not something Marinelli changed from Kiffin’s defense. The changes Marinelli made were in regards to Cover-3. Under Kiffin, a Cover-3 defense just meant the Cowboys played a three-deep zone with a variety of different types of zone coverage underneath. However, Morris Claiborne and Brandon Carr are below-average cornerbacks when they are in zone coverage; they just don’t have the instincts or quickness to do it on a consistent basis. Marinelli noticed this and took a page out of Pete Carroll’s playbook; he instilled the concept of pattern matching. This concept requires the outside cornerbacks to play press coverage and match the pattern of any route with a vertical stem. In other words, the boundary cornerbacks play man anytime the receiver runs a vertical route.

The benefit of this is two-fold. First, it allows the cornerbacks to play to their advantages, which is man coverage versus vertical stems. Also, it allows them to not have to cover crossing routes, which Claiborne and Carr struggle with. This permits the Cowboys’ long cornerbacks to not have to run with faster receivers across the field, while the linebackers and box safety react to any throws underneath the three-deep zones. The best thing about this new concept is that it puts players in positions where they are mostly likely to win, which has led to much better cornerback play through the first four games of this year.

The play that best epitomized this new concept was on Claiborne’s game-sealing interception against the St. Louis Rams. On this play, the Rams are lined up in a four-receiver set with trips right. The Cowboys combat this with their nickel personnel (two linebacker and five defensive backs). Left cornerback Brandon Carr is lined up in a traditional Cover-3 alignment, lined up 12 yards off the ball and at the snap he releases into his deep zone. Free safety Barry Church is lined up in the deep middle zone and at the snap he takes a couple steps back to get in position. Strong safety J.J. Wilcox and nickel cornerback Sterling Moore are in the box and release to cover the curl/flat zone on each side of the field. Linebackers Bruce Carter and Anthony Hitchens cover the intermediate, middle zones and react to any routes breaking to the middle of the field. Now, Claiborne lines up about three yards off the line of scrimmage. At the snap, he opens his hips as the receiver runs a vertical or “Go” route. Claiborne then turns into a man defender. He squeezed the receiver to the sideline and made a play on the ball when it was thrown, which resulted in an interception that essentially ended the game. On this play, Claiborne’s technique in Cover-3 was something that even Richard Sherman would be proud of.

Next, the addition of troubled linebacker Rolando McClain has totally changed the way the defense plays the game. The Cowboys traded for McClain to help replace Sean Lee at the middle or “Mike” linebacker position and he has done a masterful job doing just that. McClain brings a physical nature of play that was missing even while Lee was in the lineup. Lee was never a player that would physically beat the other team up; however, McClain is just the opposite. He makes the opposing teams feel his force on every play. McClain epitomizes the physical and opportunistic defense that Marinelli employs. His physical presence ignites the defense. Cowboys’ safety Barry Church said on 105.3 The Fan that McClain’s physical presence and attitude make everyone want to play that much harder.

The type of impact that McClain has brought was encapsulated in the third quarter against the Saints. On this play, The Saints are on the Cowboys’ 27-yard line and the Cowboys are in a Cover-2 defense. At the snap, McClain turns and runs into his deep middle zone, as he does that Saints tight end Jimmy Graham runs a hook route 10 yards down the field. When Graham catches it, turns and starts to run, McClain starts to accelerate downhill toward Graham. After Graham takes two steps he meets McClain from the front and Justin Durant on his side. McClain lowers his head and lays a beautiful hit on Graham that causes the ball to squirt out of his hands and into Cowboys safety J.J. Wilcox’s hands resulting in a turnover. This play shows the physical nature McClain brings to the team and the type of impact it can have.

The last major change that Marinelli has made was the position flip of Justin Durant and Bruce Carter. Last year, Carter played the “Will,” while Durant played the strong-side, or “Sam,” linebacker position. However, this was a misallocation of resources because of each players skill set. Carter is much better at playing on the line of scrimmage as a blitzer; however, he is not adept at flipping his hips, turning and running in coverage. Nonetheless, the “Will” plays off the line of scrimmage and has to turn and run to cover tight ends and running backs often. Furthermore, Durant is better in space and is better at flipping his hips and running with tight ends or running backs. Nevertheless, he was stuck taking on blockers and playing at the line of scrimmage for most of the 2013 season.

Consequently, Marinelli decided to move each player to his more natural position. Carter was at the “Sam” and Durant was at the “Will.” This allowed Carter to make use of his unique blitzing ability and his aptitude for covering underneath routes. Moreover, it allows Durant to play in space, free from having to engage with blockers immediately, and use his considerable athletic ability to make plays.

Even with the changes he made, Marinelli employs a pretty simple scheme. This simplicity means that players don’t have to think as much, which in turn allows them to play faster.

This year, the Cowboys are more physical, faster and utilize their players’ abilities in a much more efficient fashion. That is a recipe for success.

To the naked eye, Marinelli’s defense may look similar to Kiffin’s defense from a year ago; however, the astute changes Marinelli has made have allowed for the defense to prosper despite the overwhelming indicators that it couldn’t.

He may be 65 years old, but Marinelli still has a few tricks of his sleeve.