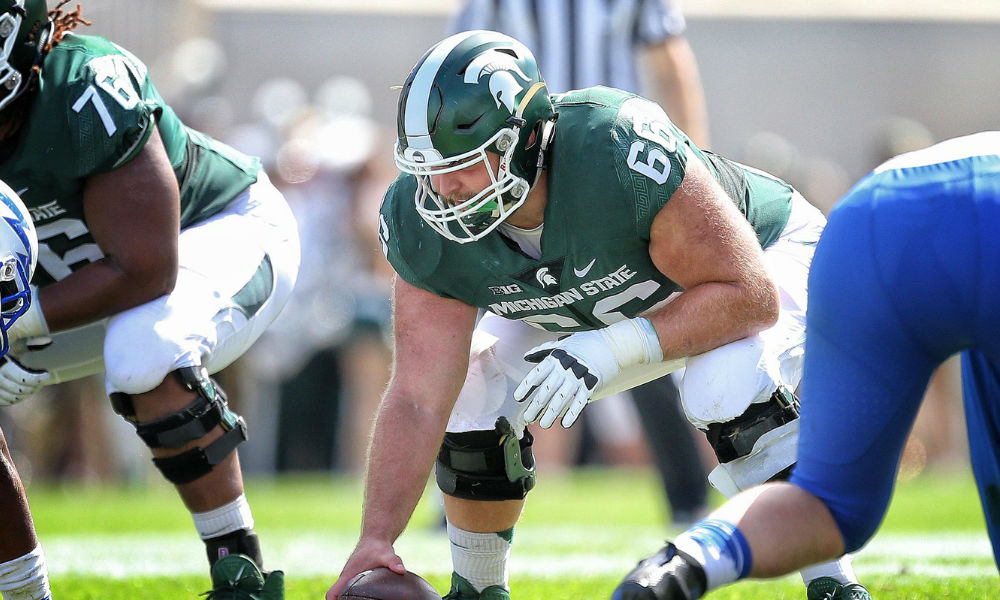 The Senior Bowl practices get underway on Tuesday morning and if you are watching them on ESPNU, there are a few things to look for during the activities in Mobile.

The most anticipated part of each practice is when the players are divided into their position groups and pitted against each other in one-on-one drills. These are some of the most competitive aspects of the week in Mobile and there are a ton to glean from each drill.

An Under The Radar Player To Watch From Each Squad.

Jack Allen is listed as a center, but you will likely see him line up all over the offensive line throughout week for the north squad. The former Michigan State offensive lineman has played at nearly every position on the line during his career and he has done an admirable job at each. Ultimately, Allen’s best position is inside where his lack of athleticism is not as big of a hindrance.

As a player, Allen is a technician with his hands as he usually times his punches well and gets his hands inside. Also, the center helps mitigate is average athleticism by taking great angles on his blocks, which put him in superior position to make the block.

Allen will have his hands full at the Senior Bowl with the north squad defensive tackles, but expect to do more than holds his own.

Another one of the undersized linebacker trend, Deon Jones is a player who will likely make a lot of noise down in Mobile. Jones is an athletic specimen at linebacker who can make plays all over the field. Jones uses his speed and quickness to flow to the ball and make plays inside or outside the box.

Jones uses his speed and quickness to flow to the ball and make plays inside or outside the box. The LSU linebacker’s size can hinder him with getting off blocks, but he does a great job of beating offensive linemen to the spot. Where Jones will likely separate himself during the practices is in coverage. He flips his hips extremely well and he has the ability to run with running backs or tight ends.

Jones isn’t talked about much at this point in the draft process, but don’t be surprised if you start to hear his name pick up steam after this week in practice.

Just One Piece To A Huge Puzzle

One problem many evaluators run into at the Senior Bowl is placing too much weight to what they see down in Mobile, Alabama. Because this is their first real life exposure to a lot of these players, they allow that to influence their grades to a high degree, which can lead to a bad evaluation.

The Senior Bowl is just one small piece to a huge puzzle that is player evaluation. An evaluator should not let one week of practices totally change their view of a player if they had done adequate research on him prior. Some players excel in a practice environment and sometimes the environment causes a player to play well below his talent level. You see this a lot with quarterbacks because they are throwing to unfamiliar receivers in a new environment which leads to a steep learning curve early.

Also, the actual game at the culmination of Senior Bowl should hold little to no weight on an actual evaluation. There are just too many factors that won’t come into play once they reach the pros. The things you do want to get a feel for are overall athleticism, temperament and competitiveness. For many teams, the most important part of the Senior Bowl week is their ability to interview and get to know the players throughout the week. It allows them to get a feel for who a player is and how he would fit with their team.