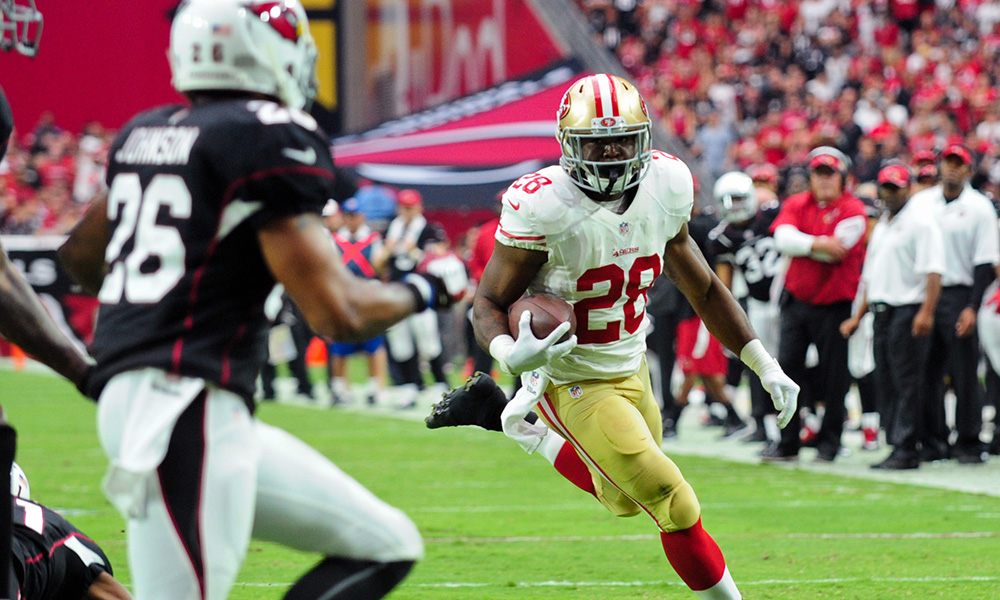 This … is … it. Two months after this series got underway, we wrap things up with the eighth and final installment of our cross-sport doppelgängers feature. For those who have not seen this series before, we go division by division and match up NFL teams with the MLB or NBA franchises they most closely resemble. This week, we run through the NFC West.

If you want to see who we paired up from the rest of the NFL’s divisions, check the links below. Otherwise, enjoy what we did with the NFC West.

Both of these franchises have been down more than they’ve been up, but they seem to finally have things pointed in the right direction. Neither has won the biggest prize in its respective sport, although both have come agonizingly close: San Diego advanced to the World Series in 1984 and 1998 but came up empty-handed, while Arizona lost its lone Super Bowl appearance after the 2008 season.

Times have been mostly tough for the Cardinals, who have won just over 42 percent of their games all-time. After winning the NFL Championship in 1947 (two decades before the first Super Bowl), the Cardinals did not win another playoff game until 1998.

The Padres have likewise struggled to build a consistent winner. Since entering the league in 1969, San Diego’s losses outnumber its wins by more than 500. The club has only made five trips to the playoffs, going 12-22 in postseason play.

The good news for these woebegone franchises is the arrow is clearly pointing upwards. The Cardinals won 10 games last year under new coach Bruce Arians and will do even better this season, with 11 wins (and counting) and a playoff berth already secured. The Padres, meanwhile, are in the midst of authoring the best offseason baseball has seen in years. New GM A.J. Preller has served notice that San Diego is ready to contend by trading for proven producers like Matt Kemp, Wil Myers, Justin Upton and Will Middlebrooks.

Both these franchises look more ready than ever to get back to the Big Stage and finally bring home the hardware.

Both of these Midwestern franchises have championships on their resumés. But it is how they won those championships — in improbable, worst-to-first fashion — that makes this pairing so perfect.

The Twins have actually won two World Series, in 1987 and 1991. The latter championship was the most unbelievable, as the Twins became the first team to finish in last place one season and win the World Series the next. The 1991 World Series is among the greatest in the history of baseball: three of the seven games went into extra innings and four were decided in the final at-bat, including Game 7 when Gene Larkin hit a walk-off blooper to plate Dan Gladden and win it for the home team.

The Rams, like the Twins, finished last in their division the season before winning it all. Spurred on by the emergence of unknown quarterback Kurt Warner, who replaced an injured Trent Green, the Rams went on to post the highest scoring margin of any Super Bowl champion in history (plus-284). Their championship triumph was as dramatic as Minnesota’s, with Mike Jones’ final-play tackle (now known simply as “The Tackle”) stopping Tennessee’s Kevin Dyson less than a yard short of the tying score on the game’s final play.

In most seasons, neither the Rams nor the Twins stand out (both have all-time winning percentages hovering around .500). But because of their ability to become instant contenders and shine in dramatic fashion on the grandest stage of them all, their fit as doppelgängers is indisputable.

These franchises boast some of the most decked-out trophy cases in all of pro sports. San Francisco has won five Super Bowls, the second most in the NFL, with all of them coming in a 14-year window from 1981 to 1994. The Celtics have won 17 championships, the most in NBA history, and are the rare franchise that has enjoyed a dynasty more impressive than San Francisco’s.

The 49ers owned the 80’s, winning four Super Bowls in that decade thanks largely to quarterback Joe Montana and receiver Jerry Rice, arguably the greatest to ever man their respective positions.

The Celtics owned the 60’s the same way the 49ers owned the 80’s. Boston won nine of 10 world championships between 1960 and 1969. Because of that unbelievable stretch of domination, the Celtics are still the only major pro sports franchise to have won the championship more than 25 percent of the time (25.4 percent).

Just because we are talking about dynasties from decades ago does not mean these teams are not relevant in the present day. The 49ers have already been eliminated from the playoffs, but they advanced at least to the NFC Championship Game in each of the previous three seasons. And these Celtics, despite being in a rebuilding phase, have won a championship as recently as 2008.

One more connection: These franchises have produced some of the most iconic names in the sports lexicon. Celtics legends Bill Russell, Larry Bird and Kevin McHale, along with San Francisco Hall of Famers Montana, Rice and Steve Young, are among the all-time sporting greats.

After digging back in the archives to tether the 49ers and Celtics, we jump back to present day to make the comparison between the Seahawks and Warriors. Seattle is a win away from locking up the No. 1 seed in the NFC for a second consecutive season, while the Warriors sit atop the loaded Western Conference.

The Seahawks, the reigning Super Bowl champions, are clicking at the perfect time. Russell Wilson is a dual threat who directs a versatile and efficient offense; Marshawn Lynch leads the league’s best rushing attack; and the defense has rediscovered its championship swagger right in the nick of time.

As dominant as Seattle has been, Golden State has been just as impressive. The Warriors have the best record in the NBA and are getting it done with a balanced performance, leading the Association in field goal percentage (.481) and opponent’s field goal percentage (.422). The Warriors’ point differential (plus-9.4) is also tops in the NBA and nearly three points better than anyone else in the Western Conference.

It is easy to make comparisons across both rosters. Coaches Pete Carroll and Steve Kerr are both positive, high-energy leaders. Wilson and Steph Curry are both quarterbacking highly explosive offenses and doing it by scoring themselves and setting up others. And both teams have underrated defensive cornerstones that make all the difference when healthy (Bobby Wagner in Seattle; Andrew Bogut in Golden State).

Both of these franchises are on top of their respective sports and are built to sustain that success for years to come.