It seems too early in the season to say “you’re done,” but the Buffalo Bills and head coach Rex Ryan have put themselves in a very tough spot with their 37-31 loss to the New York Jets Thursday night.

How tough? According to Adam Schefter of ESPN, extremely so.

As 0-1 Jets and 0-1 Bills prepare for tonight’s game: Under current playoff format, only 12% of teams starting 0-2 went on to make playoffs.

It’s not impossible to make the playoffs for the Bills, but it is now highly unlikely.

Especially with a defense that just allowed the Jets to put up nearly 500 total yards and 37 points in it and an offense which is increasingly one-dimensional, with an injury hampering Sammy Watkins and an “all bombs or nothing” approach to play calling.

A look at the schedule should only serve to make all this even clearer.

Next week, the Bills get the Arizona Cardinals at home, a team which has an excellent defense and a potent offense. The likelihood of the Bills getting the long bombs they torched the Jets secondary with—the only offensive plays which seemed to work for them—is low.

After that, it’s the New England Patriots at Foxboro, and then what could be a break against a woeful Los Angeles Rams team, and a game against a surprising San Francisco 49ers team. 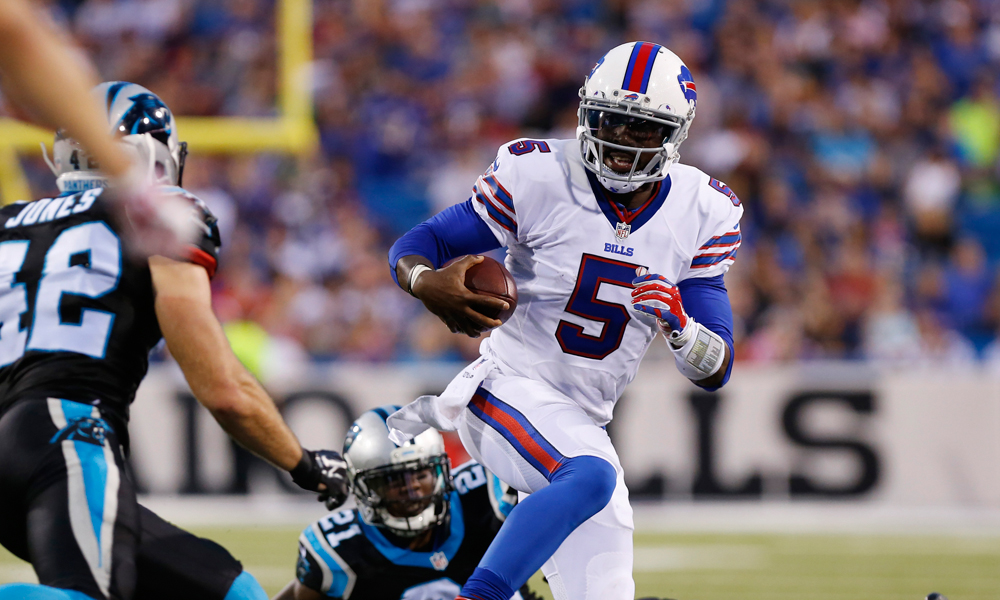 At that point, it is conceivable the Bills are 1-5 heading into a divisional game against the Miami Dolphins, followed by a second Patriots game and then a trip to Seattle for a likely loss against the Seahawks.

Right after their week off, they face the Cincinnati Bengals, Jacksonville Jaguars, Oakland Raiders and Pittsburgh Steelers. The next easy game is the Cleveland Browns in Week 15, before they finish things off with divisional games against the Miami Dolphins and the Jets.

This has to spell doom for Rex Ryan as there is a strong chance that the Bills are looking at a four or five win season. With all the blustering talk about “winning the offseason” and aiming for the playoffs, even another 8-8 season—and unlikely event looking at the schedule—is unlikely to be enough to save this guy’s job.

“It ain’t about being No. 1 in defense, No. 1 in offense, whatever,” Rex screams in a documentary the Bills made about Ryan and his brother. “No, it’s about us in this room, holding this damn trophy saying we won the whole m———-. That’s where I’m at. Don’t be afraid of it. I don’t give a s— who knows it. Here we are. Here the f— we are. That’s who the f— I am.”

Rex Ryan is fantastic at fiery speeches. He’s great at little digs to the opposing teams like having IK Enemkpali as captain after the guy broke Geno Smith’s jaw.

He just can’t seem to coach. Even with the injuries and suspensions of key players on the defense, the unit shouldn’t have been this bad on Thursday.

Now his speeches are inspiring the other team more than his own.

Steve Politi of NJ.com relayed that Jets receiver Brandon Marshall had told Ryan that he was “going to kick (Rex’s) butt” and he did, to the tune of 101 yards on six catches. In fact, the Jets were inspired enough to roll out two 100 yard receivers (Marshall and Eric Decker), a 100 yard running back (Matt Forte) and another receiver with 92 yards in Quincy Enunwa.

“When definitely had a conversation,” Marshall told Politi and the media after the win. “I love messing with Rex. He’s a great coach. He brings a lot of energy. It’s always fun when you can get a body blow in on the big guy.”

Note to Ryan: you’re not supposed to rile up the other team more than your own.

Now Ryan has to find a way to get his team on track against an insanely hard schedule. It’s early to be saying “must win” for a game—we’re only heading into Week 3. It only gets tougher from here, though.

The winning has to start somewhere for the Bills and it’s hard to see where that will be.