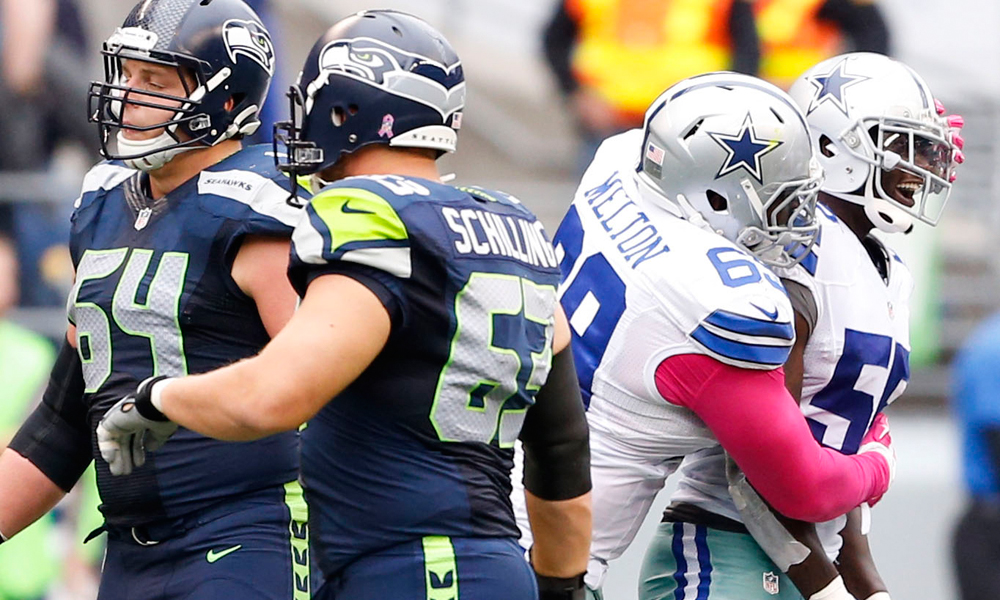 Let’s set the stage of how the defending champs were taken down in their own building.

There is 50 seconds left in the fourth quarter, the Seattle Seahawks are in their hurry-up offense. They align with 11 personnel (one RB, one TE, three WR) with two receivers split right and one split left. Russell Wilson is in shotgun with Marshawn Lynch to his left. The Cowboys have their nickel defense in and align Sterling Moore in press coverage against the lone receiver to the Cowboys right, while Brandon Carr and Orlando Scandrick line up eight yards off the ball.

At the snap, the Cowboys fall back into the traditional Tampa-2 coverage as Seahawks tight end Luke Wilson runs a seam route up the middle of the Cowboys defense. Cowboys “Mike” linebacker Rolando McClain sees Wilson running into his zone, which causes him to open stance to his left to try and funnel Wilson to the safety help on the outside. Russell Wilson stares down Luke Wilson the whole time, which allows McClain stay calm as Russell throws it away from two deep safeties and into the middle of the field. McClain then flips his hips, jumps and makes a beautiful leaping interception.

McClain’s interception sealed the Cowboys 30-23 win over the defending Super Bowl champion Seattle Seahawks in a game that the Cowboys thoroughly dominated outside of a few special teams snafus.

The Cowboys weren’t supposed to have a chance in this game. Las Vegas had them as 8.5 point underdogs to the reigning Super Bowl champs. They were entering a venue where the home team had only lost once since December of 2011. The Seahawks had beaten teams with a combined record of 11-8, while the Cowboys had only beaten teams with a combined record of 10-14. The Cowboys had the No. 1 running game, but the Seahawks had the No. 1 rushing defense and the vaunted Legion of Boom. The Cowboys defense, while improved from last year, still were giving up 6.38 yards per play, which was the highest in the NFL, while the Seahawks were rated second in the NFL in DVOA per Football Outsiders, which helps define which offenses are the most efficient.

Despite all these disadvantages, the Cowboys still came out with the win. So, what was the Cowboys formula for success?

In the running game, the Cowboys were focused on getting their offensive linemen to the second level to help limit the athleticism of the Seahawks linebackers. Bobby, Wagner and K.J. Wright are so athletic and fundamentally sound that if you allow them to run free to the ball carrier, they will make the stop nine times out of 10 for little or no gain. Therefore, to be successful in the running game you have to get hats on them quickly, so they can’t use their speed and quickness to flow to the ball and make the play. On every explosive run the Cowboys had, they did an incredible job of getting either Zack Martin, Ronald Leary or both to the second level, which severely limited the Seahawks ability to flow to the ball and make stops.

On DeMarco Murray’s game-winning touchdown run with 3:25 left in the fourth quarter, the Cowboys lined up in 22 personnel (two RB, two TE, 1 WR) with both tight ends inline. At the snap, the Cowboys ran the old-fashioned outside zone run that Alex Gibbs made famous. The whole offensive line took a 45-degree lateral step to the right as they flowed to their zones to seal off the Seahawks defenders. Leary and Martin initially chip the defensive linemen to their right, but then scrape to the second level to seal off the Seahawks linebackers to create a running lane for Murray. Leary executes a perfectly-timed cut block on K.J. Wright as he flows to the ball, while Martin turns Bobby Wagner to his right, which created a huge lane for Murray, who hit the hole hard and eventually carried Richard Sherman into the end zone for the score. This was a constant theme for all the Cowboys successful runs, get to the second level and seal off the Seahawks athletic linebackers. These type of plays allowed the Cowboys to rush 162 yards against a team that hadn’t allowed more than 101 yards yet this season.

The Cowboys decisively won the matchup between the No. 1 rushing offense and No. 1 rushing defense and it was due to the dirty work up front from Martin and Leary.

The formula for the Cowboys passing game success was to break from their tendencies. The Seahawks secondary or “Legion of Boom” prides themselves on how much they study film and how intelligent they are. This film study allows them to discover a team or a player’s tendencies, which allows them to game plan to take away those tendencies. This is what allows them to thoroughly shut down offenses that no other defenses can. If they know what you are going to do, they will take it away every time. This means that when you face them, you must break away from your tendencies and throw some wrinkles that take them for surprise. The Cowboys did this by mixing personnel and moving around their weapons into a variety of different alignments. The Cowboys utilized players like Lance Dunbar and Gavin Escobar, who hadn’t been used much thus far this season.

It also helped that the Seahawks were without cornerbacks Jeremy Lane and Tharold Simon for the game and Walter Thurmond was out for much of the with an ankle injury. This causes the Seahawks to have to play their fifth cornerback, Marcus Burley, and safety Steven Terrell as their No. 2 and 3 corners for much of the game. This allowed the Cowboys to create mismatches in the secondary, which they took full advantage of as Romo went 21-of-32 for 250 yards and two touchdowns.

The Cowboys defense only allowed 206 yards of total yards and 16 points, seven of which came from a drive that started on the Cowboys’ 14-yard line due to a muffed punt. The key to the Cowboys spectacular play on defense came down to one tactic: gap responsibility. So much of the Seahawks success on offense is due to their ability to confuse and misdirect defenses, which causes them to break out of their contain or gaps and leaves huge voids for Seattle to take advantage off. This can be done with the variety of read-option or packaged plays the Seahawks employ or it can be done just by the incredible improvisational skills of Russell Wilson.

To be successful against the Seahawks offense, you must maintain contain while rushing the passer and be incredibly disciplined with your gap responsibility in the running game to have success.

Oftentimes, analysts and fans get too caught up in sacks for a defense. Sacks are great, but against a player like Wilson they are extremely hard to come by and if defensive ends try to crash down on Wilson too fast, he will spin break contain and kill you with his arm or feet.

For this reason, the Cowboys utilized the “mush rush” philosophy on passing plays. This means the Cowboys defensive end rush the quarterback in a much more controlled state. They didn’t just crazily attack Wilson, but instead maintained their outside contain as they squeezed the pocket around Wilson, which eliminates his running and, because he is so short, his passing lanes. This was the biggest reason the Cowboys held Wilson to only two carries for 12 yards, while only allowing 126 passing yards on 14 of 28 attempts. If you eliminated Wilson’s ability to scramble and break contain he is a severely limited quarterback.

The Cowboys also employed a great deal of man coverage throughout the day. This allowed the Cowboys to create the matchups they wanted in the secondary. The Cowboys put Orlando Scandrick man-to-man with the Seahawks biggest weapon Percy Harvin for a majority of the game and just like his did against Brandin Cooks, Scandrick shut down Harvin, who had six touches for -1 yards. Scandrick is one of the few cornerbacks in the NFL who matches up extremely well with smaller, speedy receivers. With Harvin shut down, the Seahawks offense couldn’t get anything going and looked out-of-sync throughout the game, which was a huge reason why they went 5-13 on third-down conversations.

The fact that Rolando McClain, a player who was retired from football just five months ago, came down with the game-sealing interception shows just how full circle the Cowboys have come. Unlike years past, the Cowboys aren’t one of the most talented teams, but they are finally playing as a team. A team that will do all the little things to win the game and a team that will impose their will and exploit the opposing team’s weaknesses. This win was no fluke, it was a team implementing an ingenious game plan and executing it to a tee.

If nothing else the Cowboys win over the Seahawks proved two things: the Cowboys are for real and they finally have a formula that can lead to sustained success.

The Cowboys are here to stay, whether you like it or not.

NFL Week 6: What we learned