We’ve barely opened the book on Jared Goff, but now that we have a couple of games in the bag it’s worth talking about what he’s shown us so far.

The Los Angeles Rams rookie quarterback was inactive for seven games and has only started two, but has shown flashes of potential as well as the standard rookie mistakes.

He’s shown enough to gain some praise from New England Patriots coach Bill Belichick in advance of Sunday’s game between the Pats and the Rams as well.

“You just have to respect the talent and the skill that [Jared] Goff has,” Belichick said this week (relayed by MassLive.com). “You can certainly see that, particularly in this game against New Orleans, but he’s a very, very talented player with a great arm and an ability to make a lot of throws.”

Belichick always gives you the impression that if he’s praising you and you’re on another team, he’s up to something, but his words were echoed by defensive coordinator Matt Patricia.

“[Goff] has an extremely strong arm and a very accurate arm in a lot of the different throws that they ask him to make,” Patricia explained. “He’s a very good quarterback from the standpoint of arm strength and the ability to get the ball downfield. He has some tremendous skill players – Kenny Britt, Tavon Austin, Brian Quick. I mean Kenny Britt is unbelievable as far as a receiver to be able to go up and catch the ball and create vertical separation, get behind the coverage, and with a guy like [Jared] Goff who can throw it down there, that’s a big threat as far as the deep balls are concerned [and] the big plays are concerned.”

Goff’s second game as a starter—a 49-21 loss to the New Orleans Saints—showed some of what both Belichick and Patricia are talking about both in terms of Goff’s talent and the talent around him. Normally, the Rams scoring 21 points would have been enough for a win with a defense which, while averaging just over 21 points a game, had only allowed an average of 12.5 points per game over the previous four.

That could bode well for their chances to win some more games down the stretch if both the defense and Goff play to their potential.

The first half of the Saints game was the one which Belichick and Patricia will focus on first so they can prevent it from happening to them. During that first half, Goff went 12 of 20 for 167 and three touchdowns, all of which showed off good accuracy, sharp reads of the defense and a nice touch.

His first touchdown, in particular, was a beautiful pass, put where only Tavon Austin was grabbing it. It was a precision throw which allowed his receiver to go and make a play, but also kept the ball away from the defender.

Slightly better coverage—such as not giving Austin so much room to the sideline—might have made the touchdown harder to come by, but this pass was about as nice a throw as you will see and probably would have been completed regardless of coverage. 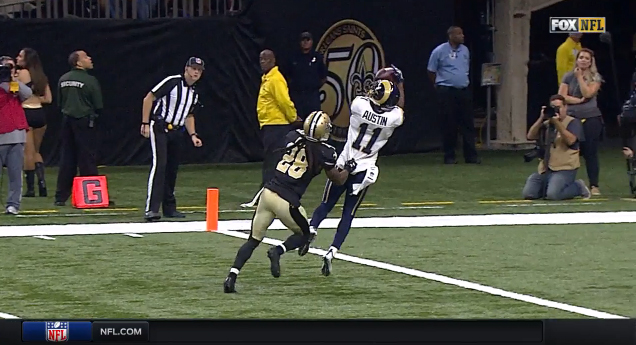 Goff is clearly better the deeper you can have him throw and he makes better decisions and passes on longer routes.

The Patriots will have to keep an eye on Austin and the other receivers on deep passes, as the Rams should open up that part of the playbook this week and New England can be hurt by teams going vertical.

We saw some signs of the rough second half awaiting Goff, though, when he fumbled the ball on his own 10-yard line, a turnover which resulted in a Saints touchdown.

In fairness, Drew Brees did the exact same thing to open the second quarter.

For Goff, it appeared as if he held the ball too long as he does have fellow rookie Pharoah Cooper open across the middle. On the other hand, Cooper isn’t very seasoned and had a defender right behind him, while defensive end Cameron Jordan had his hand up and could easily have swatted a pass to Cooper.

Ultimately, this comes down to Goff, and he flat out needs to make the decision quicker on the play.

As the broadcast points out, he has Tavon Austin open to his left, and safety Kenny Vaccaro is in the perfect spot to step in and at the very least disrupt the pass.

Either Goff doesn’t see Vaccaro or he misreads what the safety will do—neither one is a positive thing.

All in all, Goff showed flashes of his potential and enough good things for a Rams fan to be positive about handing him the reigns. That he did some rookie things—and made some bad decisions—should allow Patriots fans to sleep better as this game approaches.

Patricia and Belichick might be lauding Goff in public, but you can guarantee they’re looking at his weaknesses in the film room and will take advantage of them.

5 Best Moves of the NFL Season