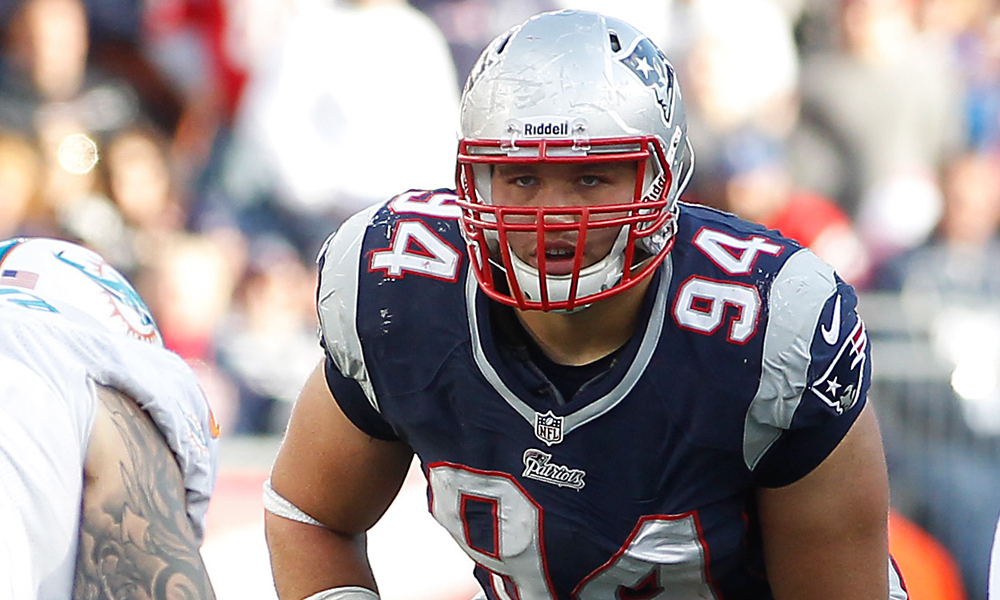 A ‘By the Book’ Block

It was just last season that Jones was involved in a controversial field goal in a Patriots-Jets game. In that Week 7 contest in New York, Folk missed a 56-yard field goal in overtime, but was given a do-over after Jones was flagged for illegally pushing a teammate from behind in an attempt to get the block. Folk cashed in on his second opportunity and New York pulled off the upset, 30-27.

Jones’ technique was textbook this time around. He got a good initial push and then timed his leap perfectly, snuffing out Folk’s potential game-winner before it ever had a chance.

The performance of Jones and his fellow defensive linemen was not as impressive against New York’s rushing attack, as the Jets controlled the line of scrimmage and reeled off more than 200 yards on the ground.

But as the saying goes, he who laughs last laughs loudest, and Jones made sure the Patriots laughed their way to a third consecutive victory. Sending the rival Jets to a sixth consecutive loss only adds to the comedy.

Blake Bortles has been impressive since taking over as the Jacksonville Jaguars’ starting quarterback midway through Week 3. He needs to do a better job protecting the football (seven interceptions), but he has already racked up over 1,000 yards and is completing nearly 68 percent of his passes despite working with a severely limited supporting cast.

Bortles has the look of a franchise quarterback, but apparently, the Cleveland Browns never felt that way. Cleveland coach Mike Pettine said this week his team would have drafted Sammy Watkins, not Bortles, had Jacksonville passed on Bortles at No. 3. Pettine also confirmed this week his team had Johnny Manziel, whom the Browns drafted at No. 22,  graded higher than Bortles.

There is no point in debating Bortles versus Manziel, at least not yet. Manziel has yet to get his chance to lead the offense and may not get that opportunity any time soon, given how well Brian Hoyer has played.

This, in turn, brings up the better draft-related question: Should the Browns have taken Watkins at No. 4 instead of trading down with the Bills for a package that included first- and fourth-round picks in 2015?

Watkins would surely make Hoyer look even better. Watkins has 26 catches so far this season, averaging 12 yards per reception. Two of his catches have gone for touchdowns and 18 others have turned into first downs. The Browns (3-2) are in the thick of the early playoff race and Watkins’ presence would only aid those efforts.

The idea of Watkins and Josh Gordon, who comes off suspension in Week 12, leading a Browns playoff push is exciting. The Browns opted for the long-term gain over the short-term payoff, which was probably the right path for a team that has been a bottom-dweller for far too long. But the debate is still fun to have and a long way from being settled.

LT Jermon Bushrod (knee/ankle) and RT Jordan Mills (foot) returned to practice on Thursday, meaning the Chicago Bears’ entire starting five is set to take the field against the Dolphins on Sunday.

Chicago’s line has been ravaged by injuries this season, with three players missing at least two games. It has been a big change from last season, when the Bears fielded the same starting five for all 16 games.

LG Mat Slauson (three games) and C Roberto Garza (four games) missed time with matching ankle injuries. Bushrod sat out the last two games after succumbing to friendly fire in practice a few weeks ago. Mills has been limited by foot soreness after he underwent offseason surgery, although he has yet to miss a start.

“It was good [to have all five back],” said Bears coach Marc Trestman. “We want everybody back as quickly as we can. We’re fortunate. We’ve got a very good room with very good players who’ve been able to fill in and help out. And that’s the luck that we have, I guess. But it was good to see Bush back in there [Thursday] and it was good to see Jordan working, as well.”

This week will mark the first time since the season opener the Bears will have all their offensive linemen available. The inconsistency up front is a big reason Chicago ranks just No. 15 in points per game (23.8) after ranking No. 2 in that category a season ago (27.8 yards per game).

Titans RB Greene out vs. Redskins

Patriots-Jets: What we learned