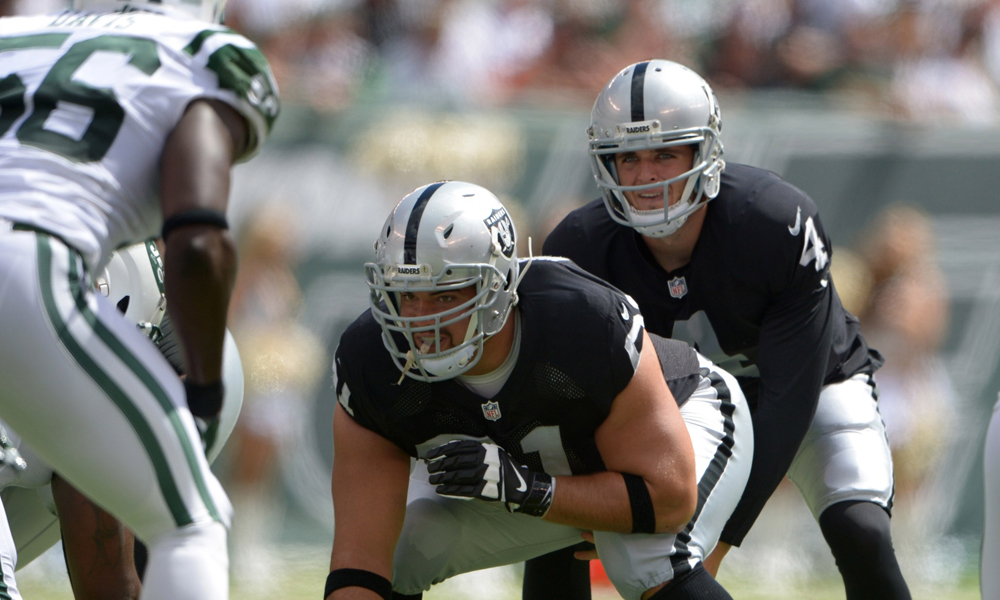 To paraphrase the great Paul Heyman, the Chiefs are now the one in 1-10.

It is hard to tell who enjoyed Oakland’s 24-20 win over Kansas City more … the Raiders, who snapped a 16-game losing streak that stretched back to last season, or the handful of AFC playoff hopefuls scrapping for one of the conference’s two tightly-contested wild-card spots.

Give the edge to the folks in Silver & Black, who went 368 days between wins. That stretch almost lasted another week, at least, when the Chiefs scored 17 unanswered points in the second half to take a 20-17 lead on the NFL’s last winless team. But the Raiders finally showed sufficient fight as Derek Carr led his team on a 17-play drive — against the NFL’s top-ranked pass defense, mind you — capped off by a 9-yard touchdown pass to James Jones with 1:42 remaining to put the Raiders back ahead for good.

“We’ve been in this end of the pool a long time,” said interim coach Tony Sparano after the streak-snapping victory. “I kept saying that eventually it is going to happen. Today they just refused to give up.”

It is a tough loss for the Chiefs, given how tightly packed things are in the AFC. It doesn’t get any easier from here, as Kansas City’s next game comes on Sunday Night Football against Peyton Manning and the Broncos. Should the Chiefs drop that contest, as well, it would mark their third divisional loss.

The focus now shifts to the other two AFC West teams, who will both look to gain ground this week with tough games at home. The Broncos host the Dolphins and the Chargers host the Rams, as Denver looks to capture sole possession of first place in the division while San Diego aims to forge a tie with Kansas City.

NFL fans who watched the careers of Adrian Peterson and Ray Rice gets submarined by off-the-field scandals might believe in karma, but that powerful five-letter word has been missing amongst running backs since the NFL placed those two on the commissioner’s exempt list.

First there was Cowboys backup Joseph Randle, who parlayed a shoplifting charge into an endorsement deal. Now there is LeGarrette Blount, who walked out on his team on Monday night and found himself in a better situation by Thursday. Blount, cut by the Steelers for his me-first antics, signed a two-year deal to return to New England, where he spent the 2013 season.

The Patriots appear ready to return to a power running game. North-and-south runner Jonas Gray has taken over the starting position and the offense has become far more efficient as a result. Gray carried 37 times last week against the Colts, so the addition of Blount should allow the Patriots to lighten Gray’s burden without getting away from the power running game.

“Hopefully, he’ll be able to help us,” said Patriots captain Vincent Wilfork. “We’re looking forward to it. He knows what we do around here. Hopefully, he’ll pick up where he left off.”

Blount’s signing also had to sting the folks in Indianapolis. The Colts lost starting RB Ahmad Bradshaw on Sunday and immediately went in search of a replacement. It appeared everything broke Indianapolis’ way when Blount and Ben Tate were released by their respective teams, but with Blount choosing New England and Tate being picked up on waivers by the Vikings, the Colts are back to square one.

Cardinals Aim to Bury the Hawks

The Cardinals (9-1) are saying all the right things after being named 6.5 point underdogs for this weekend’s game in Seattle (6-4). No one from the Arizona side has said anything to disparage the reigning champions, who are 3-3 over their last six games.

“Going up there, everybody is usually an underdog,” said Cardinals coach Bruce Arians. “We don’t really need any more extra motivation to go play them, especially at their place. They’re the world champions. We’re just 9-1, we haven’t done (expletive).”

Of course, Arians’ statement is not entirely accurate. One thing the Cardinals have done is open up a three-game lead in the NFC West with only six games remaining. Another thing they have done is win in Seattle; last season, the Cardinals were the only team to win at CenturyLink Field, picking up a 17-10 victory in Week 16 to keep their faint playoff hopes alive.

Things are different this time around. For one thing, it will be Drew Stanton, not Carson Palmer, under center for Arizona. Stanton has done well as a stand-in, but he lacks the Palmer’s accuracy and big-game experience. On the other hand, Arizona comes into this game with much more confidence. Rather than sitting on the playoff bubble as they were a season ago, these Cardinals are firmly in the driver’s seat in the NFC.

Last year’s Cardinals were fighting for their playoff lives. This year’s team, secure in its playoff destiny, is battling to push the reigning champions to the brink.

That’s not a chip on the Cardinals’ shoulders; it’s an executioner’s axe.