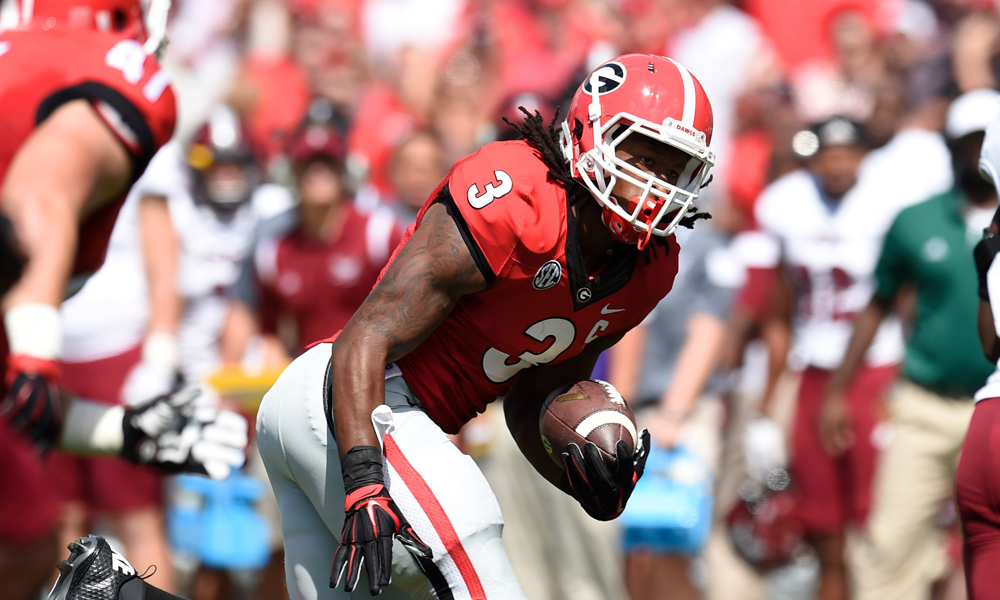 In Athens, Georgia there is a running back. You may have heard of him or seen his highlights repeatedly played on television. His name is Todd Gurley. This is the kid who is going to end the two-year drought of running backs missing out on being drafted in the first round of the NFL Draft.

The reaction by even so-called experts is as if this phenomenon has not taken place since cavemen walked the earth. That simply is not the case.

Look at the draft like an annual harvest. No two drafts are the same. So many factors weigh in on how a player’s overall stock will end up when the NFL Commissioner walks to the podium. Over the course of the last two years running backs receiving high grades from scouting departments have not been bountiful but that is about to change in 2015.

“If he’s healthy, he’s gonna make great runs. I mean you’ve gotta give him the ball,” Georgia head coach Mark Richt said in a report by The Telegraph.

Gurley returns, in 2014, from an ankle injury that slowed him down last season. He missed three games as the result and the Bulldogs were 1-2 overall in those games. Gurley is averaging a whopping 10.6 yards per carry this year. He’s rushed for 100 yards in two of the three Bulldogs’ games. The one game he didn’t eclipse that plateau was against Troy; Gurley did have 73 yards on only six carries, though.

He’s not the only first-round caliber running back this year, either. The list of candidates also includes: Wisconsin’s Melvin Gordon, Alabama’s T.J. Yeldon and South Carolina’s Mike Davis.

However, Gurley’s stock is the highest of them all; he could end up in the top ten.

In 2008, not one receiver was drafted in the first round. Not a single one! Why?

Even in this pass happy era of the NFL, if the talent’s grade does not translate to the correct value the player slips down the board. In that same draft five running backs went in round one. That was the first time that happened since 2000 and has not happened since (2008). So while running backs may have lost some steam, no position is immune to being slighted and not be drafted in round one.

Currently, Gurley ranks 25th, in the nation in rushing yards with 402 yards and ranks fourth all-time at Georgia with 2,776 rushing yards. Gurley joined former Bulldogs great Hershel Walker as the only two true freshmen at Georgia to rush for more than 1,000 yards.

“He’s one of the best you’ll ever see,” Vols linebackers coach Tommy Thigpen said. “He’s really a fantastic player. He does everything.”

Gurley is the real deal, and he could become the first running back since Trent Richardson to break the top five in the upcoming 2015 NFL Draft, if Gurley elects to leave school early. The junior is blessed with trifecta numbers of height, weight and speed. Gurley brings versatility out of the backfield, as he is able to run and catch with ease. The junior has the skill set to be the third SEC running back drafted in the top five of the NFL Draft since 2008, a group that includes Darren McFadden (2008) and Trent Richardson (2012).

The NFL is a copycat league and if Gurley explodes upon his arrival in the NFL, like he has at Georgia, teams will scour every college campus searching hoping and praying they find the next big thing in the NFL. A player of Gurley’s caliber changes the landscape of the game, he’s that special.

Redskins get good news on Williams