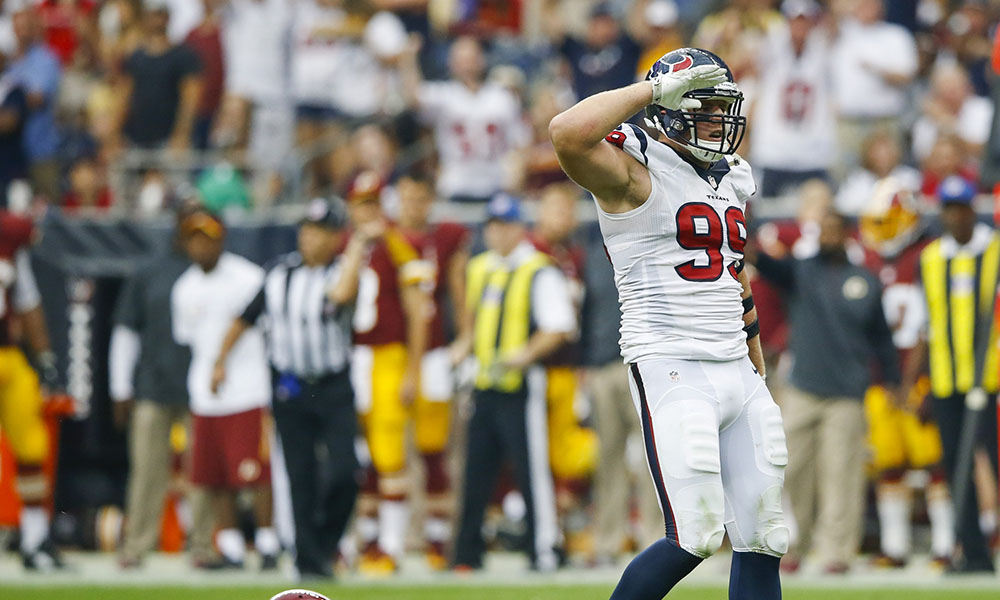 Can a non-quarterback be the National Football League’s Most Valuable Player?

The argument that only a quarterback can be the MVP stems around how they have the football on every play and have a larger determination of the outcome of each game and season.

That logic is sound.

What about a player who doesn’t touch the ball who affects the football game on every single play, terrorizing the opponent’s quarterback and even being a great goal-line threat on offense?

If there’s one non-quarterback that can be the league MVP, it’s Houston’s J.J. Watt.

“What more can you say? I said this to someone this week, the guy really is a factor on every single play,” Texans head coach Bill O’Brien said of his star defensive end. “When you really watch the film closely, it’s pretty neat to watch that on every single play he can affect the game, whether it’s a batted pass or a sack or a tackle for a loss or maybe they’re running away from him and he chases it down.”

Not only is Watt one of the most talented players ever at his position, he is also one of the hardest workers. In a sports landscape where oftentimes players receive big contracts and then ease up, Watt is the exact opposite.

“I have said all year long that all I can control is how I play on the field,” the 6-foot-5, 289-pound defensive end from Wisconsin said. “I work as hard as I can in practice, watch as much game film as I can, workout as hard as I can, and go out on the field and try to make as many plays as I can to help my team win.”

His teammates back up his work ethic.

“J.J. Watt, he’s a great player,” Texans free safety Kendrick Lewis said. “He comes to work every day and comes to play every week. It takes a lot of pressure off of us on the back end.”

Watt can line up anywhere on the offensive line and have success, similar to what the Philadelphia Eagles used to do with Reggie White. To put it simply, Watt is a defensive coordinator’s dream come true.

“We’re creative in how we use him, we move him around quite a bit, and teams are, as the season goes on, you have a lot of different games to look at to track how we use him and I think Romeo (Crennel) and the staff have done a really good job of moving him around and teams do a good job of making sure he’s blocked in different ways,” O’Brien said. “(Watt) doesn’t get frustrated, he just keeps plowing ahead, he’s a relentless player, and he just knows that every play, like he says, is an opportunity to make a play and help the team, and that’s a great attitude.”

Being such a strong, physically dominant player, Watt is often double- or triple-teamed and held on nearly every play. Instead of getting frustrated, he sees it as a challenge.

“I take it as a sign of respect and I look at it as a challenge,” Watt said of the routine double-teams. “If they have to put two or three guys on you and if they have to hold you, whatever they do it’s just another challenge and when you get back there it’s that much sweeter. So while I wish they would get every call right and every holding call, I’m sure there’s stuff out there that everyone does that doesn’t get called.

“I’ll just go out there and play as hard as I can and if I beat you while you hold me then that’s darn good too.”

“I was a little bit of everywhere and that’s how you like it,” Watt said after the game. “You get a chance to rush from all different positions. I just go out there and try to take advantage of whomever I’m playing.”

“I’ve said that earlier in the week, if he’s a caliber player to be an MVP and without a doubt he is,” Jaguars’ head coach Gus Bradley said following the game.

There’s really no way to stop J.J. Watt or even contain him. In 61 career games, Watt has 51 sacks. Add in 11 forced fumbles and 11 fumble recoveries and the man dominates the game without touching the football.

But what about when he does touch the football?

Watt has three goal-line targets this season on offense and has caught all three passes for touchdowns. Add in two scores on an interception and fumble recovery and Watt has more touchdowns than LeSean McCoy, Frank Gore, Tre Mason, Jason Witten and Pierre Garcon.

Motor is normally a scouting term that is often affixed to defensive players who work hard but don’t have as much natural talent. J.J. Watt is what happens when someone has all the talent and the best motor.